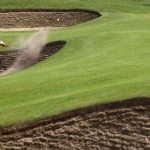 Brooks Koepka hits out of a bunker on Tuesday during a practice round for the Open Championship.

The South African, according to some fun research by the Open Championship website, has played in the first two rounds of golf’s oldest major with the eventual winner in the past two tournaments: In 2018, he played with Francesco Molinari, and in ’19, he played with Shane Lowry. If you’re a storyline bettor, i.e., the type of gambler who gambles as if something is destined to happen, this is a juicy one, and you, no doubt, were interested to see that Grace was grouped with Bryson DeChambeau and Jordan Spieth for this year’s opening rounds.

And bettors have bet at a good clip on a player in that group.

According to oddschecker.com, a site that tracks both odds and which players are the most popular with gamblers, Grace is the fifth-most bet-on player over the past seven days, with 3.5 percent of all bets placed. Among the top 10, he trails only favorites Jon Rahm (5.4 percent), Brooks Koepka (4.6), Justin Thomas (3.9) and Tyrrell Hatton (3.6), and Grace is ahead of Louis Oosthuizen (3.4), Spieth (3.3), Matthew Fitzpatrick (3.3), Shane Lowry (2.8) and Tommy Fleetwood (2.8).

Which … is the year before this Branden Grace theory began.

It’s maybe something. It’s maybe nothing. We’re not saying you should bet on Grace. We’re not saying you shouldn’t bet on Grace. But we’ll all be watching the tournament when it begins on Thursday at Royal St. George’s in Sandwich, England — and will maybe take an even closer peek at that 4:25 a.m. ET Thursday/9:26 a.m. Friday grouping. On to our expert to-win and sleeper picks.

To-win: Louis Oosthuizen, +2,800. It was a disappointing U.S. Open finish for Louis Oosthuizen, who stumbled down the stretch and lost to Jon Rahm, but that doesn’t change the fact that he’s played brilliant golf this summer. In his four starts in May and June, he was 2nd twice, 8th and 18th. His only major victory came in an Open Championship. Maybe his second will be too.

Sleeper pick: Stewart Cink, +11,000. Who has won twice this season and already has an Open title? Stewart Cink.

To-win: Patrick Reed, +3,000. Ah, the return of the old “ground game” argument. For what it’s worth, I think that picking a player purely on his ability to navigate the conditions is typically a bad idea — particularly when Jon Rahm is playing the best golf of anybody alive. That said, it does seem like Reed’s game is a unique fit for the tournament and the moment, and a win here would surely add a sprinkle of Ryder Cup flavor.

Sleeper pick: Padraig Harrington, +17,500. History tells us that if an older man is going to compete at a major championship, it’s likely to be at the Open. Of course, we already saw Phil Mickelson win the PGA at 50 years old, and Richard Bland hold the 36-hole U.S. Open lead at age 48, so why not Harrington, at 49, to round out the trio?

To-win: Xander Schauffele, +1,800. He seems to have ditched the arm-lock putting experiment. He’s built for major championship pressure and for links golf. He’s going to win.

Sleeper pick: Richard Bland, +25,000. It’s easy to dismiss Bland’s first 36 holes at the U.S. Open as a fluke, but what if it was actually his weekend that was the fluke? If you want someone ready to handle the linksland and is coming in in proper form, here’s your guy — nearly 50 or not.

To-win: Patrick Reed, +3,000. It’s been a while since Reed has made any significant noise in the golf world. A rare lull for him. His game is quietly doing the talking these days as he continues to be one of the most consistent players in the world. Guys who are able to get a little creative with their shot selection, especially around the greens, tend to perform well in the Open. Hence why I’m riding with Reed.

Sleeper pick: Guido Migliozzi, +16,000. Italy is riding high off its Euro Cup victory, and Migliozzi looks to keep the celebration going. He broke out in the U.S. Open and has played well for the past several weeks and months. If I’m being honest, I really want Guido back in the mix so I can continue using Sopranos memes for him. Those odds for a player trending in the right direction and Sopranos memes are a perfect storm for me.

Sleeper pick: Robert MacIntyre, +9,000. His strong showing at the Masters was no fluke. Same with his fine play in last week’s Scottish Open.

To-win: ​​​​Dustin Johnson, +2,250. While DJ hasn’t performed up to his standards in the majors so far this year (cut, cut, T19), he finished T2 the last time the Open Championship was held at Royal St. George’s, in 2011. He obviously plays the course well, and his overall game has improved immensely in the past 10 years. I’m looking for DJ to turn his 2021 around with a win at the Open this week.

Sleeper pick: Richard Bland, +25,000. Bland is coming off a T50 at the U.S. Open, a T4 at the Irish Open, and a T15 at the Scottish Open, and he won the British Masters back in May. In terms of long shots, there’s not too many coming into this week with better form than Bland.

To-win: Justin Thomas, +2,050. Has gone bogey-free in his past 26 holes and posted a T8 last week at the Scottish Open. Have a good feeling JT picks up his second major at Royal St. George’s.

Sleeper pick: Johannes Veerman, +40,000. Finished 3rd and T8 in his past two European Tour starts. Worth a flier at that price.

Sleeper pick: Lucas Herbert, +10,000. He’s been playing great golf for a few weeks now, and you gotta jump on a heater when you see one.