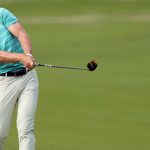 Sam Burns hits his second shot on Friday on the 18th hole at TPC Craig Ranch.

Sam Burns, two weeks removed from his first PGA Tour victory, was asked if “a breakthrough win like that can create a lot of confidence.” His answer was as easy as swing on Friday. “Yeah,” he said. Here are three things you need to know after Friday’s second round of the AT&T Byron Nelson at TPC Craig Ranch in McKinney, Texas.

A breakthrough win can create a lot of birdies, too.

On the front nine, Burns birdied four holes, none with a putt longer than 7 feet. He was two shots better on the back nine. In all, Burns shot a career-low 10-under 62 for a 17-under total and a two-shot lead over Alex Noren, and a three-stroke advantage over K.H. Lee.

“Yeah, everything out there felt great,” Burns said. “Just feel like we got into a good rhythm throughout the round. Made a run right there on the back nine, and so it was nice to be able to finish it off with two birdies at the end. Good way to end the day. Just trying to get a good game plan out here for tomorrow and let’s see what happens.”

Jordan Spieth is six shots back

Jordan Spieth, the first-round leader, started out with a bogey after missing the green on his approach, then played three under from there for a two-under 70. Not a terrible round, but it dropped him five spots down the leaderboard.

“Just got off to a poor start,” Spieth said. “I mean, being — even through those first four on the back nine, I think the scoring average will probably be one- to one-and-a-half-under par on those holes. So losing a couple to the field there got me a little frustrated. If you kind of tap the brakes a little when the scores are going to be low, you feel like you have to play catch-up.”

Among other notable players, Lee Westwood shot a 64 and is eight shots back; Bryson DeChambeau shot a 68 and is 10 behind, as is Jon Rahm after a 69; and Hideki Matsuyama, in his first start since winning the Masters, fired a 70 and is 11 back.

Brooks Koepka, also in his first start since the Masters, shot a 70 and missed the cut by three shots.

Other notable names not moving on to the weekend were Rickie Fowler, Jason Day and Sergio Garcia.