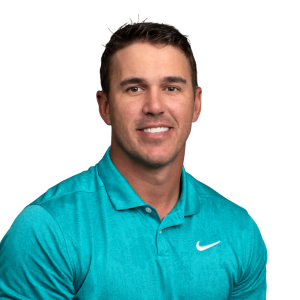 Winner of PGA Championship or U.S. Open during the past five seasons. (Exempt through December 31, 2022)

Koepka virtually assured himself a future World Golf Hall of Fame induction when he won the U.S. Open and PGA Championship in 2018. With his 2018 U.S. Open victory, Koepka became the first golfer to defend a U.S. Open title since Curtis Strange in 1988/1989.

Koepka admits baseball was his true love in sports and once claimed he would rather play pro baseball than pro golf. The love of baseball comes from his father, Bob, a former pitcher at West Virginia Wesleyan, as well as his great uncle Dick Groat. Groat won two World Series as a shortstop with the Pittsburgh Pirates, earned the 1960 National League MVP award and earned a spot on eight National League All-Star teams. Gifted athlete Groat was also drafted third overall in the 1952 NBA Draft by the Fort Wayne Pistons.

Prior to his 2018 U.S. Open and PGA Championship wins, Koepka was sidelined for 15 weeks with a left wrist injury so severe he was in a soft cast for two months and didn't touch a club for 91 days. Koepka teed up at the 2018 Tournament of Champions in Hawaii, but practice prior to Kapalua and finished last in a 34-man field. The injury was a partial tear to his tendon that required withdrawing bone marrow from his hip and injecting it into his left wrist, and then another session a month later of platelet-rich plasma injections.

Koepka has developed somewhat of an outcast or lone wolf persona for a reluctance to divulge much information during media interviews. Koepka said before winning the 2018 PGA Championship at Bellerive that he was "always overlooked" by fans and media. A month later at the PGA Tour's season ending Tour Championship, Koepka was omitted from the pre-tournament press conference schedule despite being a clear favorite to win the tour's Player of The Year award, which he did.

Koepka is in a relationship with actress and model Jena Sims. In 2004, Sims won the Miss Georgia Junior National Teenager pageant. As an actress, Sims first main role was playing Cassie in Attack of the 50 Foot Cheerleader (2012) while she also performed roles in several of the Sharknado films. Sims also appeared in an episode on the hit TV series Entourage. In 2019, Koepka and Sims were jokingly ridiculed for posing in a photo together on social media wearing the same thong. The couple were on vacation in the Maldives with close friends, Paulina Gretzky and Dustin Johnson.

Koepka and best friend Johnson created headlines following Team USA's heavy Ryder Cup loss in Paris for reportedly almost coming to blows at the European team's celebration party. The pair were also rumored to have had a bust up on the charter flight from the Tour Championship in Atlanta to Paris ahead of the Ryder Cup. Although Koepka denied either altercation, his captain Jim Furyk divulged that a confrontation did take place at the after-party, stating that it was very brief. However, Johnson and Koepka traveled to the Maldives together shortly after with their girlfriends.

The 205-pound, Koepka is a weight-lifting enthusiast – working constantly on his bulging biceps, huge shoulders and impressive strength with well-known trainer Joey Diovisalvi.

Having spent the early part of his career playing in Europe and Asia, Koepka is a keen traveler – regularly exploring destinations such as Thailand and the Maldives with girlfriend Sims.

The Latest News on Brooks Koepka