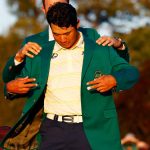 Hideki Matsuyama will tee it up at the Byron Nelson this week, his first start since the Masters.

Hideki Matsuyama had to wait to celebrate the biggest win of his life with those closest to him. After he won the Masters in April, Matsuyama — who was spotted at the Atlanta airport with his green jacket — flew back to Japan but was forced to quarantine for two weeks.

Luckily he had lots to catch up on.

“I was able to probably read every news article and newspaper and magazine and TV,” he said. “And seeing how the Masters win was portrayed in Japan was great, really unforgettable.”

He added that it was “by far” the most he’s ever read about himself.

“A bit embarrassing,” Matsuyama said. “I’m not used to all that attention, but grateful that people took notice.”

And while Matsuyama said he has yet to re-watch the complete Masters broadcast, he did check out some highlights.

“I got nervous again,” he said. “Just like I was playing, and it was, at some points, difficult to watch because I was so nervous and all those nervous memories was brought back.”

Matsuyama met with the media on Tuesday at the AT&T Byron Nelson, as he readies for his first start since his life-changing Masters win one month ago. In Japan he spent time with his wife and daughter, his parents and other family members. He said he only wore his green jacket twice — once when he met with the media and another time when he met the prime minister of Japan, Yoshihide Suga, to receive the Prime Minister’s Award.

Matsuyama said he had little time to practice in Japan and his goal now is to prepare for the PGA Championship, which begins next week at Kiawah Island. This is his third Byron Nelson, although it’s the first time it has been played at TPC Craig Ranch. He played the front nine on Monday morning and planned to check out the rest on Tuesday and Wednesday. He’s 20/1 to win this week, and when he tees it up on Thursday the Masters will be officially behind him. At least, for now, or until he needs to plan his Tuesday night Champions Dinner menu.

“Sushi does come to mind,” Matsuyama said. “I’m a little worried. I don’t know if everyone will really like sushi or not, but I’m going to check with some people and get their advice and what they think. There’s a lot of really good food from Japan, a lot of, some of the best beef in the world, so I’m thinking about that and looking forward to it next year.”