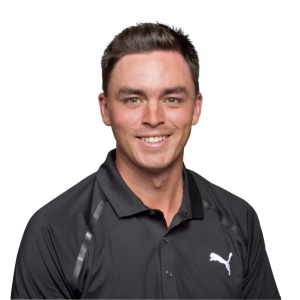 Winner of the Players Championship in the last five seasons and the current season: (Exempt through December 31, 2020)

Although Rickie Fowler (in 2014) joined Jack Nicklaus and Tiger Woods as the only players to have finished in the top five in all four majors in a calendar year, his 2015 Players Championship victory stands out for chasing down a five-shot deficit with six holes to play.

Fowler was introduced to golf aged 3 when his Japanese grandfather, Taka Tanaka, handed him his first golf club. For the first few years, Fowler only hit balls at a driving range in Murrieta, California with a self-taught swing. Fowler was a two-time All-American at Oklahoma State University and won the Ben Hogan Award as the nation's top collegian after his first year. He also won the Phil Mickelson Award as the nation's top freshman. Fowler was unbeaten in four matches and helped the United States defeat Great Britain at the 2009 Walker Cup.

Fowler's first love was motocross, which originated from his father, Rod, who won the 1986 Baja 1000 racing for a Yamaha team. Fowler gave up competitive dirt-bike riding after an accident prior to his freshman year in high school resulted in a couple of broken bones in his foot. He still rides occasionally and is friends with several of the sport's stars, including Australian moto and supercross legend, Chad Reed.

In 2015, Sports Illustrated annual anonymous player survey asked golfers to pick the most overrated player on the PGA Tour. Fowler and Ian Poulter shared first place at 24 percent. One week later, a clearly offended Fowler won the Players Championship despite facing a five-shot deficit with six holes to play. Fowler produced the greatest finish in the then 34-year history of the TPC Sawgrass spectacle, emerging victorious from a three-man, three-hole aggregate playoff.

Fowler is inked up and sports three tattoos. Near his left elbow, he has a block 'G' in honor of Georgia Veach, the daughter of a Seattle pastor and friend who was diagnosed with lissencephaly. Fowler had the tattoo done before the 2015 Presidents Cup. He also has a Japanese script containing his grandfather's name, Yutaka Tanaka, on his left bicep. His third tattoo came shortly after representing the USA golf team at the 2016 Summer Olympics and it depicts the five Olympic rings.

Fowler is engaged to Allison Stokke, a former pole vaulter who set several high school records before becoming an All-American at the University of California. However, she never made the U.S. Olympic team in the sport. The couple began dating in 2017 before Fowler proposed to Stokke, who is also a glamorous Instagram fitness model, in June of 2018. Stokke unintentionally received worldwide celebrity when photos of her competing in pole vaulting as a 17-year-old in 2007 in New York went viral online, prompting comment pieces nationally from The Washington Post, Los Angeles Times and the New York Times, and from British broadcaster the BBC.

Fowler loves to go fishing around his home of Jupiter and the Bahamas, although the athletically gifted Fowler and his fiancée prefer to fish while riding standup paddle boards.

Fowler is a gifted social media user, regularly documenting his life, career and sponsors (such as Cobra Puma, Mercedes-Benz and Farmers Insurance) to his 1.5 million Instagram followers

The Latest News on Rickie Fowler