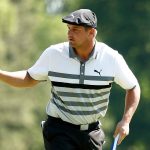 Bryson DeChambeau had an eventful Saturday morning before his third round tee time at the Wells Fargo Championship.

“I made triple on 7 and then chipped in on 8 for birdie. I thought I had to make birdie on the last and I didn’t, missed the putt, and I was like there’s no way I’m making [the cut, I’m in] 90th place,” DeChambeau said Saturday. “So we just said, all right, let’s pack up, let’s go.”

He’s lucky. As a major champion and top-five player in the world, Bryson’s travel accommodations look slightly different than yours. When it comes time to hop on a plane back to his home base in Dallas, Texas, the reigning U.S. Open champion needn’t worry about prior reservations nor checked bags. He and his team simply charter a private jet from their current location back home.

Friday afternoon in Charlotte was no different. DeChambeau and his crew exited Quail Hollow in the afternoon and were aboard a private jet home well before dinner time.

And, as happens all-too-often in the telecommunicatively challenged world of air travel, by the time they reached cruising altitude, things had gone remarkably awry.

Back in Charlotte, things were changing quickly. Cool, calm conditions in the morning had given way to 15 mph winds in the afternoon and a steadily firming golf course. Players who’d entered the afternoon well ahead of DeChambeau on the leaderboard were making bogeys, and a lot of them. With each player who fell further down the leaderboard, Bryson inched higher.

By the time they touched down (shortly before 6:00 p.m. local time), his fate was sealed: he’d made the cut at 2 over.

“So I looked at Conner [and said], ‘Well, whoops, that was a mistake,'” DeChambeau said with a laugh.

Of course, it did not matter that he’d just landed 1,026 miles away from the site of the weekend’s PGA Tour event. He had only two options: withdraw from the event or book a return trip in time for his 8:10 a.m. ET start Saturday.

With the clock ticking, Bryson’s team immediately got to work booking his return trip. The first option — to immediately turn the plane around and fly back to Charlotte — wasn’t feasible; crew rules meant there wasn’t anyone available to fly the plane.

Eventually, DeChambeau settled on another idea: flying overnight. It was far from a perfect scenario, but at least it’d allow him to spend several hours in his house and sleep in his own bed before returning to the course.

After a quick discussion with the flight crew, the updated itinerary was set. Bryson would board a 2:45 a.m. flight out of Dallas and land in Charlotte shortly after 6:00 a.m. local time. (And for those scoring at home, the updated schedule left enough time for a short workout at home.)

“After I got off the plane, I was like, you know what, we’re here for the night so might as well sleep in my bed and get up really early,” he said. “I did about an hour workout, hung out with my roommates that were there and just had dinner at Eatzi’s and had a couple protein shakes and stuff like that and just worked out and went to sleep.”

DeChambeau rose for the day shortly after midnight, and a few minutes later, was ‘wheels up’ to Charlotte.

“I got here at 6:20 a.m.,” Bryson said. “Drove 30 minutes to the golf course, put on my clothes in the locker room and headed out to the putting green.”

A mere 12.5 hours after he first landed in Dallas, DeChambeau had returned to Quail Hollow in time for the third day of the Wells Fargo Championship — a herculean feat in coordination. And in a feat of perhaps equal impossibility, the big man turned around to shoot a 3-under 68 for the day, a number blunted by a double-bogey 6 on the 18th hole.

For his part, the closing double did little to suppress Bryson’s pride, given the circumstances.

“For whatever reason, I just feel like the more weird things happen to me, the greater my resolve sometimes can be and today was a case of that,” he said. “Got a little unlucky on 18, but other than that, you know, I played a great round of golf today. I’m very pleased.”

That’s a good thing, but the work isn’t close to done for DeChambeau. The emotional toll of his weekend is nearing its end, but the financial toll could receive a sizable aid with a few birdies Sunday. Such is life for a too-frequent flyer.

“Way too expensive, but the thing is, I have a chance to go make a good check this week and I think that would offset it,” Bryson said. “So if I was to not come back and withdraw, lose world ranking points and all that, I had to incur the cost. It’s my fault.”