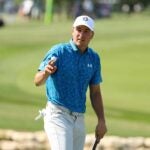 Jordan Spieth is looking for a PGA Championship lead-in win at the AT&T Byron Nelson.

After three days of play at TPC Craig Ranch, we’ve reached the final round at the 2022 AT&T Byron Nelson. Below, find everything you need to know about Sunday’s final round tee times.

Jordan Spieth is … back?! At the 54-hole mark, golf’s favorite Texan has launched himself firmly into contention at the Byron Nelson, taking advantage of a de facto home game in pursuit of his third win in the past 14 months, and second on Texas soil. Spieth (20-under) trails only Sebastion Munoz (21-under) heading into Sunday’s final round after a third-round 64 that featured a stunning nine birdies.

Trailing Spieth is a cast of big names headlined by Joaquin Niemann. The Genesis-winning Chilean (-19) is one back of Spieth and one ahead of James Hahn and Justin Thomas (18-under). Hahn shot a tournament-low 61 on Saturday, while Thomas fired a 64 for his third-consecutive round in the 60s.

It’ll be Spieth, Munoz and Niemann in the final grouping on Sunday afternoon — a group sure to capture the attention of golf fans everywhere looking for hints as to the favorite for next week’s PGA Championship at Southern Hills.

Below, find everything you need to know about final round pairings; you can tune into the action beginning at 3 p.m. ET on CBS.