Should we be concerned over Jordan Spieth missing short putts? He says no. 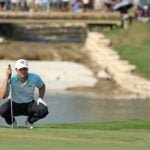 Jordan Spieth lines up a putt on Sunday on the 18th hole at TPC Craig Ranch.

You, the Jordan Spieth fan, may be worried. So we begin with the man himself saying everything’s gonna be OK.

“Sometimes we miss those,” he said.

And Spieth’s right. Sometimes they do. We all do. Only sometimes seems to be cropping more frequently of late when it comes missing putts from a distance that you and your golf buddies may otherwise pick up. At the Texas Open the week before the Masters, Spieth missed from 3 feet, then circled around the hole — and missed from 2. In his last start before this week, in what turned out to be a win at the RBC Heritage, he missed from 12 feet on 18 during the third round — then missed from 18 inches, and he revealed the day after that his wife, Amy, told him that he needed to count to five on the gimmes going forward.

So when Spieth again whiffed from short range, this time from 2 feet, 9 inches during Sunday’s final round of the Byron Nelson, you could make a case that these hiccups have become a bit of an issue. And if you want to play the woulda, coulda, shoulda game, there’s also the fact that Spieth finished just one shot behind eventual winner K.H. Lee, and yes, that missed 33-incher counted as one shot.

But read his quote again — “sometimes we miss those” — and you can see Spieth’s thinking there. He’s rationalized it. If you’re concerned, he’s not. He even broke down what happened, so the misses aren’t necessarily a mystery to him.

“It was, I just got in my own head about the wind on that one.” he said. “I also missed a three-and-a-half-footer on 7 three days ago. So sometimes it’s tough; sometimes we miss those. Like I made 98 of them this week, and you miss two of them.

“But the one on 10 today was, I was pretty confident stroking the ball today. I was gaining, I probably gained strokes on the field on the greens, and really that’s what I’m looking to try and do each and every round. That one I just, the wind blew it off the right side of the hole, so I decided to play it right-center, and it — and then the wind stopped and the grain took it over to the right. It’s just tricky little pins.”

“I thought I made some really nice 5-foot sliders down the stretch,” he said. “I had one, after I blew one by five or six feet on 14, that’s a putt that is really nerve-racking because it’s a must-make and you don’t want to three-putt. And it was a little double-breaker, too, and I just, I cruised it right in the middle.

“And then made a decent 3-, 4-footer on 15. And then 16, I had one that broke about a cup from six or seven feet there. So those putts are really nice to make, those are ones that I just kind of I put good fluid stroke on, more judging line and speed, I was more outwardly focused than stroke focused. So that’s really important under pressure as I look into a major.”

Which is, in fact, next. The PGA Championship tees off Thursday at Southern Hills, and it’s the one major that’s escaped him to date.

With that, we’ll leave you with this, Spieth fan:

“So we’ll get on greens next week that remind me a lot of Colonial, bent grass, which is gradual slope where you don’t have a lot of tricks, which I think will be nice and I gained a lot of confidence on the greens this week,” he said.

Your guy says the greens at the Tulsa, Okla., gem remind him of a place where he’s won once and finished runner-up three other times.