Who will win a major in 2022? A novice’s guide to a tempting golf bet 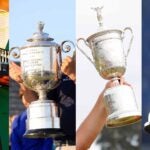 Who will get their hands on golf's four major trophies in 2022?

Welcome to the 2021-2022 PGA Tour season! Despite the Tour Championship putting a bow on the previous season just two weeks ago, the new Tour schedule starts this week at the Fortinet Championship in Napa.

This (hopefully) will be the first completely normal season on Tour since 2018-19, with the evolution of Covid protocols allowing for a full slate of regular-scheduled programming. That, of course, includes the four majors, which will be played in their traditional positions on the calendar.

Speaking of which, now that the new season is here, it’s time once again to get to the most important question on golf fans’ minds: who will win a major in 2022?

Predicting winners of golf tournaments is a tricky business, but BetMGM is currently offering a “To win a major in 2022” bet that gives you four opportunities to hit the money.

Say your favorite player is Tony Finau (+750), and you put your money on him, but he misses the cut at Augusta National in April. No worries, he (and you) have three more shots at three more majors.

Now, I am no golf betting expert, not even close. I’m even less of a general betting expert. But I have closely followed every moment of the PGA Tour — and the four majors — for well over a decade as part of my job. So I know a thing or two about players’ past major performance, as well as the current state of their games and their injury statuses.

Below I detail the pros and cons of six possible bets: two to stay away from, the two best bets, and two high-risk, high-reward options. Whether or not you want to take my advice, you can sign up for a BetMGM account today and place your bet, then sit back and watch the majors unfold.

There are very few surprises on this list, with all but two players having won majors in the past. If everyone had even odds, it would be hard not to put your money on Jon Rahm. The current World No. 1 finally broke through for his first major victory at the 2021 U.S. Open, and he’s unquestionably the hottest golfer on the planet.

But given his stellar play, Rahm’s odds are rightly the worst of the bunch in terms of your potential winnings: +250. For the novices like me, that means if you placed a $100 bet on Rahm and he won a major, you’d only win $250. Still, that means you’d more than double your money. So it wouldn’t be the worst bet you could make, but certainly not the best either.

Then there’s Brooks Koepka (+350). The 31-year-old famously raises his game to new heights at major championships, and he’s already won four in his career. But Koepka’s dealt with nagging injuries recently that have kept him from playing his best. While he could recover quickly and get back to the top of his game, it’s best to wait until 2023 to put your money on BK.

If you had to pick from the Top 12, I’d go with two names: Jordan Spieth and Louis Oosthuizen. Spieth hasn’t won a major since 2017, but after years of struggles he completely reclaimed his game in 2021, as evidenced by his comeback win at the Valero Texas Open. But Spieth also played great in the majors. He finished T3 at the Masters, 2nd at the Open, and contended at the other two. On top of that, he’s already proven himself with three career wins on the game’s biggest stage. To put it simply, Jordan Spieth will win a major again, and it’s looking like 2022 might be the year it happens. If you bet on him and he pulls it off, you’ll quadruple your money.

Oosthuizen’s major drought is much longer than Spieth’s, dating back to his sole win at the 2010 Open at St. Andrews. But Louis had a good chance to win every single major in 2021, finishing T2, 2, and T3 in the final three. He’s one of the best players alive, and he’s currently playing like it. At +600 odds, he might be the best bet among the Top 12.

Once you get further down the list of odds (you can see the full list of BetMGM odds and start betting here, just choose your state, choose “Golf” as your sport, then click on “Specials” under Top Events), your chances of truly winning big get higher and higher, but the risk rises exponentially as well. If that sounds more like your style, then I’ve got two players you should consider: Will Zalatoris and Phil Mickelson.

Zalatoris’ odds come in at +1000. In case you don’t know, the 25-year-old star just earned PGA Tour Rookie of the Year honors for last season — and he wasn’t even a full member of the Tour. But why trust your hard-earned money with a largely unproven player who hasn’t even won a Tour event? It’s simple. In his first-ever appearance in a major at the 2020 U.S. Open, Zalatoris contended and finished T6. At his second major, the 2021 Masters, he finished 2nd. His third major start? A T8 at the PGA Championship. Clearly this kid can play, especially in the majors. Better yet, a small bet of $100 would pay out $1000.

Finally, we come to 51-year-old Mickelson, who will be 52 for the final two majors of 2022. Early this year, we weren’t even sure Phil would qualify for all four majors. Then he went out and shocked the world by winning his sixth major at the PGA at Kiawah Island, once again teaching all of us that you can never count Phil out. Now, he’s nothing of a sure bet, especially given that his game faltered the rest of the season. But Phil can put it together and win at any time, as he showed last May, especially at the Masters where he has won three times. If he was higher up on the odds-list, he’d be a pretty terrible bet. But with odds of +1800, the added risk would pay off big time.

Whether think my four picks are worth betting the house on, or you know you can do better yourself, you can place your bets via BetMGM today right here.