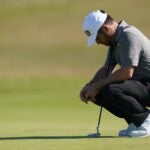 Louis Oosthuizen had another major near-miss on Sunday at Royal St. George's.

On Sunday at the Open Championship, as Collin Morikawa began to separate himself from the field, I wondered for a moment if Louis Oosthuizen would rather come in third than second, thus avoiding the agony of another runner-up finish.

It was mostly a silly thought and the thought of someone who thinks and writes about this sort of thing far too often. To Oosthuizen, the only added “agony” of a runner-up would be some extra questions about winning and the heartbreak of a near-miss. He’d get those anyway. But in a golf tournament, we too often forget that second place is preferable to every other position except first. And it pays accordingly. Oosthuizen could buy several new tractors with the paycheck difference between second and third.

Louis Oosthuizen is not a choke artist. Let’s start there, to get it out of the way. He began Sunday’s finale at the Open Championship with a one-stroke lead, he played lackluster golf and he did not win the tournament. He has done similar things before. But he did finish T3, marking another spectacular major showing from the 38-year-old. The fact that his Sunday showing is considered a failure is another reminder that we’re not very good at thinking about this sort of thing. It should be a reminder that we can celebrate his terrific showings while still wondering what might have been.

At the last three major championships, this is the list of players who have beaten Louis Oosthuizen:

Not a shabby list. While we’re at it, here are the male golfers under the age of 50 who have more runner-up finishes at majors than Oosthuizen:

That’s it. That’s the list. Woods has seven runner-up finishes. Oosthuizen has six. After Sunday’s T3, he has two bronze medals to go with the six silvers. But in professional golf, we keep track of winners. With the exception of Tokyo in a couple weeks, we don’t do medals. (We do do money, every week.) And so the King Louis-as-bridesmaid narrative continues, accurate but underappreciative.

Oosthuizen remains a joy to watch on golf’s biggest stages. While his short game has become his calling card of late, newcomers to the Oosty Show typically fall in love with his swing first. Paul Azinger called it syrupy. David Feherty described it as “like watching a door opening and closing.” What they’re getting at is the fact that a man who might challenge 5-foot-10 can move a club so efficiently that he can pound drives with a shockingly simple move.

His effortless power used to propel Oosthuizen higher on the long-drive charts. In 2015 he ranked 31st on Tour in driving distance — but 146th in Strokes Gained: Putting. This season he’s down to 94th in driving distance, but entered the week leading the Tour in SG: Putting and 10th around the greens. He has evolved to short-game wizard. His renaissance has been special to watch.

On this particular Sunday, Oosthuizen’s swing looked solid. He hit 10 of 14 fairways and 13 of 18 greens. But his misses were roundly punished and he couldn’t match the effortless scoring of his first two days nor the stripe-show put on by Morikawa, his playing partner.

It was no shock Oosthuizen didn’t come out of the gates hot; the first six holes are a tough stretch where he’d made just one birdie through three rounds. When he made bogey to Morikawa’s par at No. 4, the lead was tied. No problem — game on.

But Oosthuizen’s bogey at 7, a par-5 that the rest of the field was eating alive, marked a huge blow to his chances. One pairing ahead, Spieth and Corey Conners both made eagle. In his own group, Morikawa made birdie. Then Morikawa birdied the next, too. The gap was suddenly three.

Oosthuizen didn’t go away. He issued a reminder of his deadliness with a golf club at No. 11, a 253-yard par-3, where he striped an iron directly at the flag. So directly, in fact, that it hit the pin, glanced off to a few feet and set up his first birdie of the day. It wouldn’t be enough.

After his win, Morikawa took a moment to gush about Oosthuizen’s game and his general way of being.

“Louis is an outright amazing player and person. I hope I get more pairings with him because he’s just a great guy to play with,” he said. “Just everything about his tempo. It’s nice to see another guy just stripe it down the middle. I mean, when I watch him play and hit his drives, I’m like, ‘Wow, I want to hit it like that.’

“Yeah, Louis is consistent, he really is. He’s going to keep knocking at these doors, and I’m sure he’s going to knock a few more down. He’s just too good.”

Let’s review Oosthuizen’s quote-unquote “losses” at the last three majors of the year. The first came at the hands of Phil Mickelson, an all-time great who cashed in his Destiny Coupon for a week at the PGA Championship. The next came when Jon Rahm, the world’s best golfer, needed to make bombs on each of the last two holes of the U.S. Open to edge him out. And the third came on Sunday, when a generational irons player with a newfound putting stroke and a resurgent Jordan Spieth took the top two spots on the podium. Sometimes you just get beat.

“Another second place, you know, I’ve got to take it,” he said after the PGA. “But I feel like I could have probably get two or three more shots out of my game.”

On Sunday at The Open, Oosthuizen didn’t speak to the media after his round. He sent out a tweet, congratulating Morikawa and poking fun at another near-miss. Sometimes there’s just not much more to say, anyway.

It’s natural to wonder when players come this close how it might affect them when they leave the course. Oosthuizen’s heartbreak is no media invention; he’s acknowledged himself just how badly he wants another major win. But he also seems almost uniquely situated to deal with the near-misses. His farm in Ocala, Fla., seems like an oasis. When he’s on the road in the States, he stays in the same RV every week. He exists in a bunker of stability and simple comfort. And after a disappointing result, he can truly get away.

“I just spend time on the farm with the family, with the kids, and just get my head away from golf completely,” he said after his opening round. Oosthuizen’s happy place is with his family — and his toys.

If Oosthuizen hasn’t found the secret code to closing out golf tournaments, he seems to take solace in the fact that he has everything else pretty well handled.

When Spieth finishes second, as he did on Sunday, there’s perhaps more fanfare but less long-term concern that he’s missed an opportunity. Partly that’s a function of age; Spieth is 27 while Oosthuizen is 38. But it’s also because Oosthuizen still somehow keeps sneaking up on us at majors. His performances can feel like statistical anomalies; he’s a strong player in other events but he’s not this good. Even the folks in Las Vegas price Oosthuizen like they expect an inevitable regression to the mean. How can he keep playing like the best golfer in the world only when the pressure is highest? So we feel for him, both because his misses are so near and because future chances seem less guaranteed.

But if there’s anything to be learned from King Louis perhaps we should learn it from the man himself. On Saturday, pressed on his laid-back demeanor, a reporter asked if there is anything that gets him worked up. He cited a pull-hook 5-iron he’d hit just 45 minutes before. “It was the wrong club. It was the wrong choice I made, and I hate making wrong decisions,” he said. How ’bout other stuff, off the course? Waiting in traffic?

“Everyone gets worked up on stuff like that. I mean, little things. Just chill.”

In other words, don’t worry about Louis Oosthuizen. He’s doing just fine, thanks. He’s controlling what he can. And he’ll be back.