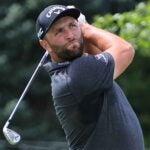 World No. 1 Jon Rahm at The Northern Trust last week.

The freakish thing — and anybody can pick up on this — is how short and how fast Jon Rahm’s backswing is. Golf fans used to watch Payne Stewart hit driver on the range, entranced by his dripping-syrup rhythm. Something to which you could aspire. Steve Elkington, the same. Adam Scott, ditto. Tiger in his prime, of course. But would anybody try to swing as fast as Rahm?

But the next generation of elite players? Harder to say.

In the Fast Back, Fast Down Hall of Fame, being organized now, these luminaries are considered certain first-ballot inductees: Hubert Green, Lanny Wadkins, Nick Price. Hogan, of course.

As for Rahm, your reigning U.S. Open champion, he’ll be on the ballot as soon as he reaches the minimum age requirement, which is 35 (per Article II of the Hall’s constitution). Rahm is 26 and will meet the age requirement in 2029.

In the meantime, don’t blink. If you were watching Rahm Monday afternoon at Liberty National, for FedEx I, you know what we’re talking about. At the U.S. Open in June, the same. Next month, at the Ryder Cup at Whistling Straits, you’ll have the chance to see it again. If you’re watching carefully.

“Jon Rahm is back to impact before most golfers complete their backswings!” John Novosel will tell you.

That’s young John Novosel. His father, the senior John Novosel, is the godfather of tempo timing and the author of the bible of the subject, Tour Tempo. (My colleague and friend John Garrity was his co-writer.) The son has a new book out, called Tour Tempo Force. Rahm is a Tour tempo force.

The original Novosel breakthrough came from the filming and taping of swings. In a standard video recording, 24 frames — 24 individual images — are captured every second. Novosel realized that the best swings, and the best golfers, all had a ratio of 3 to 1, counting the frames on their backswings versus their downswings.

In other words, on a ratio basis, his timing is perfect, as 6×3=18. (Also in the 18-6 camp: Rickie Fowler.) But Rahm’s swing is, Novosel Jr. says, “lightning fast. Jon Rahm is a poster boy for Tour Tempo.” That is, his ratio is perfect. Fast, but perfect. It looks fast and it is fast but it’s also perfect.

Novosel says Hideki’s tempo numbers range from 27-9 to 30-10. “The funny thing is if he has to hit a feel shot, like a hook around trees or something unusual, the pause goes away,” Novosel says.

Back to Rahm: “He loads his system with more force and that creates more speed,” Novosel says. “Even though he has a short backswing, he’s able to produce a ton of speed and part of that is because of his fast backswing.”

I asked Novosel to list others who should be charter members of the FB-FD Hall of Fame. He cited Gary Player, Arnold Palmer, Annika Sorenstam, Moe Norman, Brooks Koepka, Lee Trevino. Jack Nicklaus as a young golfer. Phil Mickelson as an older one.

“Bryson DeChambeau has become super-fast in his quest for speed,” Novosel says.

Bryson, Bryson — of course, of course. (“My backswing couldn’t hold a candle to Bryson’s,” Nick Price says.) He’s young and fast. Just like Rahm. Look for more of it, in the years to come. Short and fast and long and straight. As for career longevity, another subject for another day.