Here’s how Rickie Fowler changed his swing during quarantine

Rickie Fowler wants his major. That’s not something he tries to shy away from whenever he’s asked about it in interviews. Late last year, he took a bold step to help him achieve that goal: He paired with a new coach — GOLF Top 100 Teacher John Tillery — and set about fine-tuning his swing.

The pair have attacked the impromptu offseason as an opportunity to improve. Together, they’ve been working on a few things to help make Rickie’s swing more efficient and repeatable, as Tillery described recently on Travis Fulton’s podcast “The Stripe Show.”

“Ultimately, we’re just trying to make this thing a little easier for him, I don’t need to reinvent the wheel,” Tillery said. “All the pieces of all the things we’re doing are about helping him move a little better, and help get the golf club in a little easier position where he can manage it.”

It’s still early days, but already the results have started showing in Rickie’s swing and will surely only improve as he becomes more comfortable. Here’s a few I noticed during the TaylorMade Driving Relief charity skins match, but first, one caveat: The camera angles aren’t going to be perfect, so if you’re someone who loves getting angry about golf swing camera angles, should probably just click away.

For the other 99 percent, just keep it in mind; we’re talking big picture…. 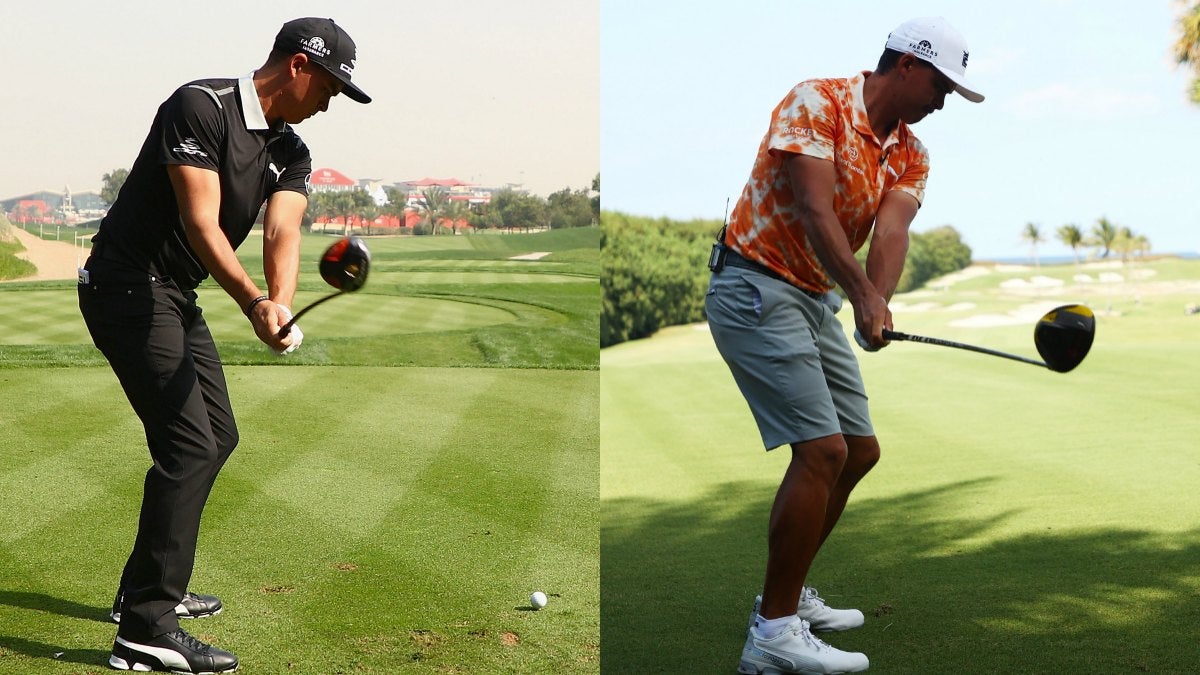 To many golf fans, the most notable move of Rickie’s swing comes on the backswing. He gets the clubshaft pretty laid-off, or pointed to the left of the target, at the top of his backswing, and then proceeds to steepen the shaft slightly on the way down as a way of matching it up.

In the podcast above, Tillery says that he and Rickie have been working on getting the clubshaft slightly steeper on the backswing earlier to prevent the need to do it at the start of the backswing.

It’s subtle, but you could see elements of that move starting to appear on Sunday. Whereas in 2017, Rickie turned his body away from ball earlier, opening the clubface slightly more along the way, yesterday he appeared to be tilting more (rather than turning) and not opening the clubface as much early, which helped him get the shaft slightly steeper, earlier. 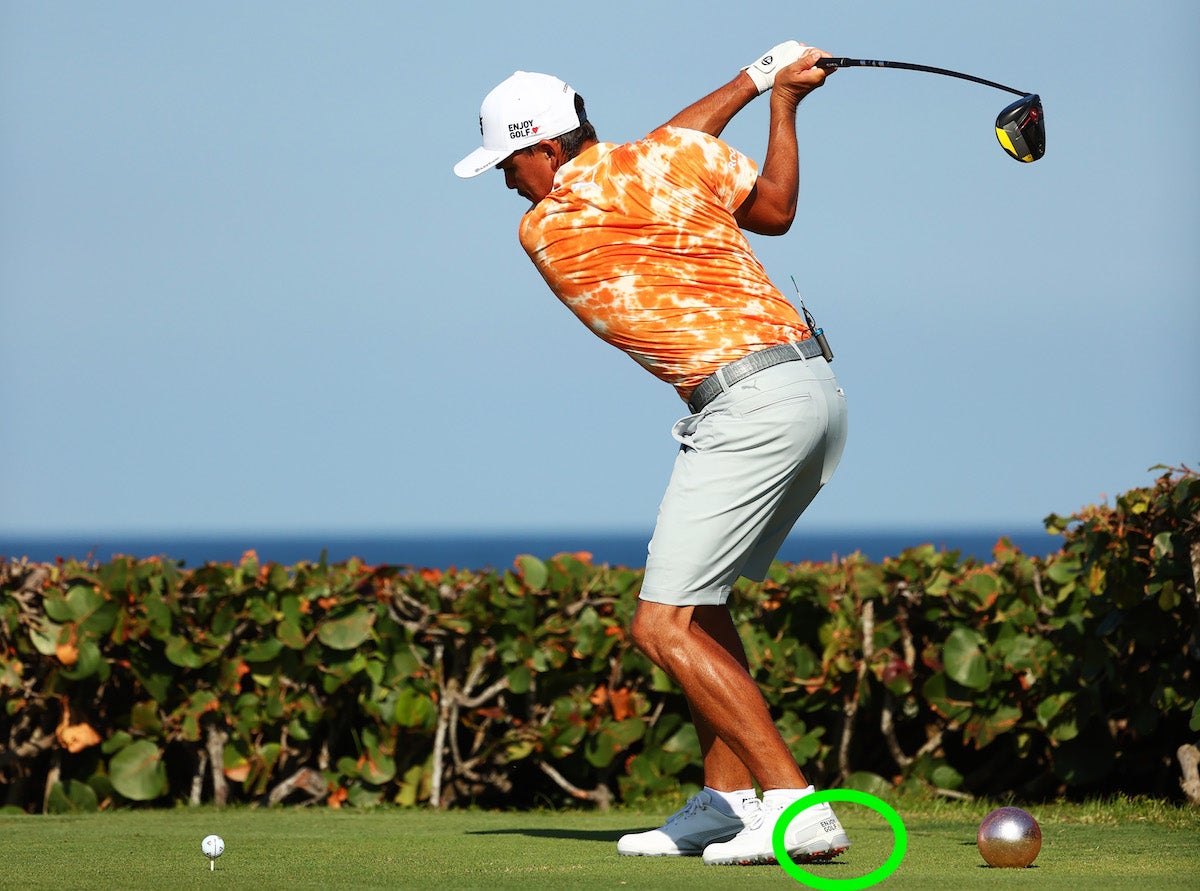 Another subtle change that eagle-eyed viewers may have noticed was Rickie’s left heel lifting ever-so-slightly off the ground in the backswing (and no, it’s not something he’s been doing in recent years). It’s the result of a bigger coil and load into his right side, which means more pressure — which most golfers know as “weight shift” — is moving to his right side for added power. 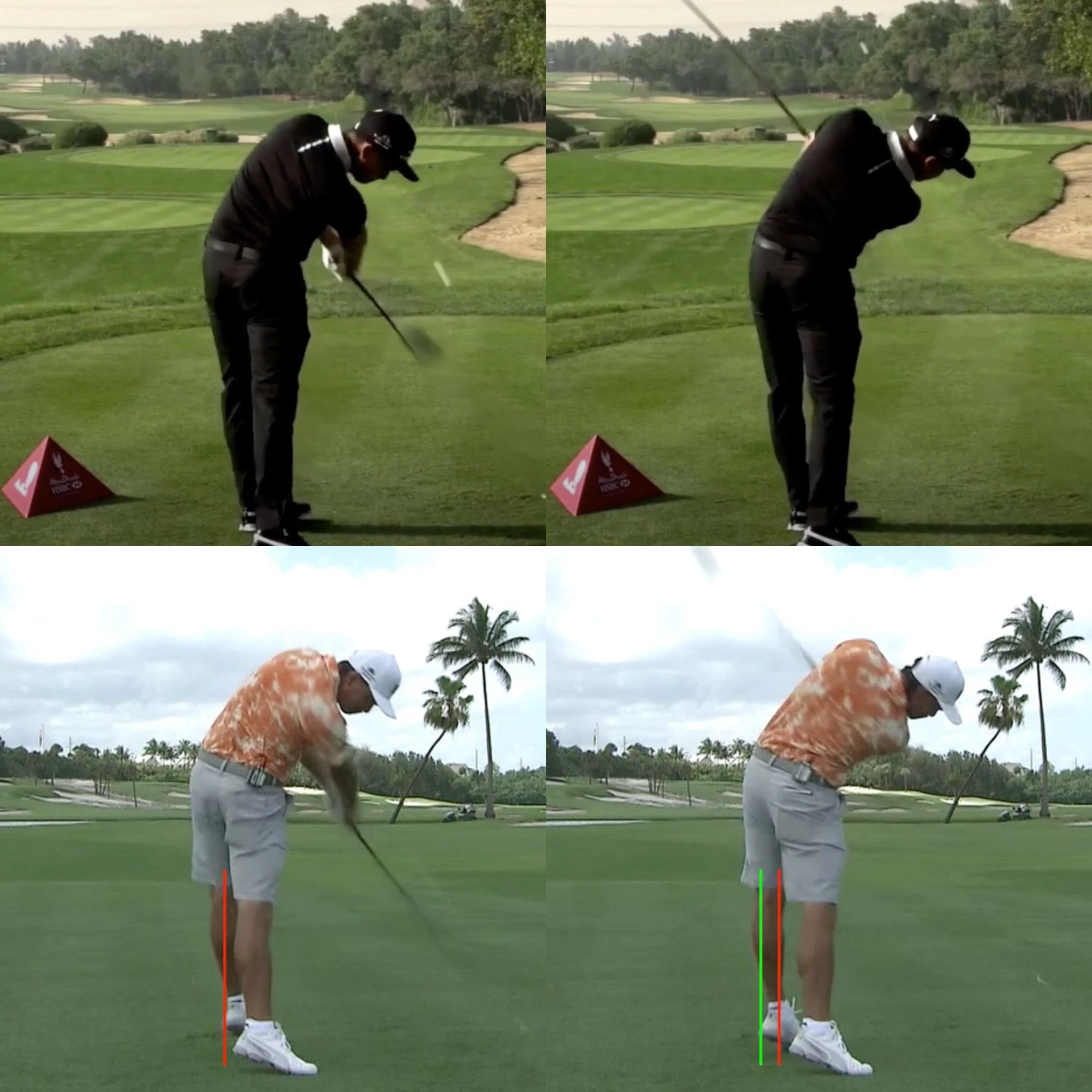 But the most notable change of all in Rickie’s swing was the result of his bigger backswing turn.

During the skins game, you could see the vertical force within his golf swing had seemed to increase notably. Whereas previously Rickie’s left heel remained planted as he swung through the ball, Rickie was more up on his toes at impact (similar to his friend Justin Thomas), an indication he’s pushing up off the ground more during his downswing for greater speed. You can also see his left leg clear left more through the ball as a result of all that force, something that he didn’t do before.