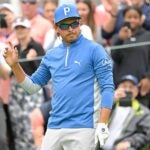 Rickie Fowler waves to the gallery on Thursday.

Rickie Fowler had a bogey to remember. Well, technically, no bogey is ever worth remembering, but this one had some significance and can easily be considered a “good bogey.”

Fowler was even through five holes in the first round of the Wells Fargo Championship at TPC Potomac at Avenel Farm on Thursday, but on the par-4 6th he pumped his drive into the native area right of the fairway. He took a drop, electing to do so on one of the forward tee boxes, and again pushed his ball into the same native area. This time he was able to find it, but he was only able to pitch out 57 yards back to the fairway.

Now he had 134 yards and was hitting his fifth shot, which he then holed for a routine bogey. The best part might have been Fowler’s reaction, as he started counting up the shots with his fingers.

According to the Tour, it’s the longest recorded holed bogey or worse by any player by ShotLink, which has been used in the vast majority of PGA Tour events since 2004.

Fowler birdied the 9th to shoot an even-par 35 on the front nine.