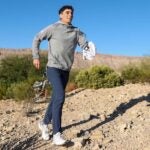 Joaquin Niemann, on Friday on the 1st hole at the Summit Club.

Joaquin Niemann hit his first shot on the 1st hole at the Summit Club in Vegas 50 yards right, miraculously found it in a bush, grabbed it, dropped it another 50 yards to the right, hit from two holes over and one-hopped it in for a birdie three during Friday’s second round of the CJ Cup. He then turned to a nearby cameraman for PGA Live.

“Should go and play the roulette now,” Niemann said. He shook his head and wiped his brow.

Very. And he was very right. He should go play roulette. And bet on green. Or play blackjack. And hit on 20. Each game has better odds in Sin City than what he pulled off on the golf course.

To begin one of the wilder sequences to start a round you’ll see, Niemann shoved his tee shot right on the 385-yard, par-4 1st, where it then hit a cart path, bounced and dropped down a slope away from the 1st hole and ended up under a desert bush. He had a few options.

Niemann, of course, could play it as it lies, but that would require: a blind shot back up the hill and, yes, hitting from a desert bush. He could take stroke-and-distance relief and rehit, or he could take lateral relief and drop within two club lengths of the bush. Niemann twice marched up toward the top of the slope to check where the flag was, and his caddie walked all the way to the green to get a yardage. With the 3rd fairway about 50 yards to the right of him, Niemann cleverly would apply Rule 19.2b, which says “the player may drop the original ball or another ball in a relief area that is based on a reference line going straight back from the hole through the spot of the original ball.”

With his caddie giving him a yardage of 105 yards, and a target of “just to the left of” a tree in front of him, Niemann hit from the first cut of rough and began his walk up the hill. He’d stop about halfway up, take off his hat and laugh.

Niemann’s shot went about 103 yards, bounced once and dropped in the hole.

“Oh my gosh!” playing partner Jason Day shouted on the green. “It went in! It went in!”

“I didn’t see anything,” Niemann told his other playing partner, Charley Hoffman, when he finally reached the green. “Nothing, nothing, nothing.”

“What did you make?” asked Hoffman, who saw nothing but Niemann on the tee, then the ball bounce in.

“I did an unplayable, went back to the fairway, gave him a nice number and boom,” Niemann said.

Boom. Niemann would finish his round with a three-under 69 and is at eight-under overall entering the weekend.

“This is why people play golf,” analyst Karen Stupples said on the PGA Tour Live broadcast. “This is the fun bit of it.”