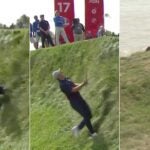 Jordan Spieth didn't have an easy look for his pitch onto the 17th green.

Jordan Spieth and Justin Thomas were in trouble. Down 2 with two to play against Jon Rahm and Sergio Garcia in Friday morning foursomes on the opening day of the Ryder Cup at Whistling Straits, they needed to win the final two holes just to halve the match.

But on the par-3 17th, Thomas’ tee shot hit the downslope of a mound short and right of the green, and it sent his ball across the putting surface and barely over the railroad tie ledge along the left side of the green. It was grim, but Spieth, who has made a living of pulling off big shots at big times — like at the John Deere, Travelers and The Open, to name a few — came through in dramatic fashion.

Needing to hit the ultimate flop shot from a messy lie, Spieth took a huge hack and lofted his ball into the air as his momentum took him down the hill and toward Lake Michigan.

“Be careful; we might lose him,” Nick Faldo said on the broadcast as Spieth shuffled down the hill. (On the broadcast later, Mike Tirico said Spieth took 24 steps backward after hitting the shot.)

Luckily for Spieth, he was able to stop before he reached the water. And better yet, his shot came to rest about five feet from the cup.

“He hit an unbelievable shot,” Garcia said. “I didn’t think there was a chance he could hit it on the green.”

And for those wondering: did Spieth really almost fall into the lake? Yes, he says, he did.

“I’d like to say, I don’t think I exaggerated that fall — you know how steep that is,” Spieth said. “Once I started moving, I was like, I’ve got to keep moving until I find a flat spot. Yeah, it’s kind of one of those shots that you practice as a kid for fun, and you don’t ultimately want to have it. And the chances of it going there, you could roll a thousand balls off the green, and it’s not going to stay where it was. I hit like a 52-degree because a 60 might have gone over the back of my head, and you know, just tried to flick it right underneath and hit it as hard as I could, as high as I could.”

Thomas wasn’t able to covert the putt for par, but it didn’t matter anyway as a birdie would have likely been the only way to extend the match. Rahm and Garcia won 3-and-1 for the first point of the week.