You think you’ve hit your ball right? This pro may have you beat. 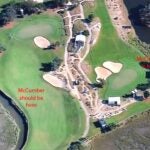 The 16th hole on Friday on the Seaside Course at Sea Island Resort.

Tyler McCumber watched as Kyle Stanley and Troy Merritt hit their tee shots on the par-3 17th at the Seaside Course at Sea Island Resort. Only, McCumber wasn’t in Stanley and Merritt’s group during the second round of the RSM Classic. Nor their hole. Nor their fairway.

McCumber sliced one right Friday, it bounced off a cart path, and it went farther right. And just how far offline was it?

“Now this has got to be, I don’t know, what 70 yards right of the fairway,” analyst Gary Koch said on the Golf Channel broadcast.

“I have the yardage for you, Gary,” analyst Curt Byrum said. “Because we have a laser, we were able to laser him and then we added another 20-plus to the pin. I got him at 142, but he is — he hit a cart path and then downwind it got clear over there. It’s, I’d say he’s 100 yards right of the fairway on 16.”

And some 25 yards left of Stanley, Merritt and their third playing partner, Jonas Blixt. The 16th runs parallel to the 17th, but where the 16th ends, the 17th begins. So after McCumber watched as Stanley and Merritt hit to their par-3 green, they watched as McCumber hit back to his par-4 one, from their left rough. Having to hit a blind shot because of a spectator tent to the right of the hole, McCumber came up about 50 yards short. If you were to look at a shot tracer of shot one and shot two, they almost formed a right angle.

McCumber then walked up to his green — cutting across the route of Stanley, Merritt and Blixt, who were walking up to their green.

“So this doesn’t happen often, where players actually kind of pass each other,” Koch said on the broadcast. “One headed to the 16th, the others coming up to the 17th. Sometimes …”

From there, McCumber pitched on to 15 feet, and he made the comebacker for par, keeping him a stroke above the estimated cut line. “Well, this would be the par of the day,” Byrum said on the broadcast ahead of the putt. McCumber bogeyed 17, then on 18, he maybe had the birdie of the day, after hitting right and into a waste area, getting a free drop due to a sign and hitting to 14 feet before dropping the putt.

“Just think about his last three holes,” analyst Trevor Immelman said on the broadcast. “The par on 16 from the wrong hole. On 17, he missed a 5-footer for par. And then that birdie there.