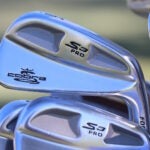 SEA ISLAND, Ga. — Most golf fans would assume that PGA Tour players all use the latest and greatest equipment that’s available to them, whether it’s the newest release from a company, or one-off prototypes.

For the most part, that assumption would be correct. Players works tirelessly with their coaches and tour reps to make sure they’re dialed into the very best equipment for them, squeezing out every yard possible that’s on the table. Every now and then, however, there’s a case of a player sticking with the same piece of gear, year-after-year.

Tiger Woods and Jordan Spieth, for example, have used the same putters for nearly their entire careers. Kevin Kisner has used the same driver for about six years. Adam Scott, before switching to new prototype irons recently, was using irons that came out in 2003.

There are sporadic cases of clubs standing the test of time on Tour, and let’s add Jonas Blixt’s Cobra S3 Pro muscleback irons to that list.

While perusing PGA Tour players’ equipment on the putting green at the 2021 RSM Classic on Monday, I noticed Blixt had an old set of S3 Pro blades, which came out in 2011, in the bag. I knew he played those irons for most of his professional career, but I figured he may have switched them out by now. As it turns out, they’re still holding strong in his gamer setup.

For Blixt, it’s a matter of knowing exactly how the irons perform for him.

Since iron play is more about precision and less about raw distance, Blixt believes he’s not really giving up any advantages to the field in terms of advanced technology.

“I think it’s fun to get new golf clubs, but they don’t necessarily perform better,” Blixt says. “Especially with irons, not much has happened in the iron department over the years. If you wear them out, you get new ones.”

Of course, Blixt hasn’t used the same exact set for 10 years. He’s used the same model, but he changes the iron heads out every so often to ensure he has fresh grooves.

Since Cobra no longer produces the S3 Pro irons, though, Blixt recently had to ask the Cobra team to go through and find an old stash of clubs. A few months back, they found two fresh sets of Blixt’s model, but that’s all he has left.

“This is the second to last one they had, so I have one more set that I can use,” Blixt said. “I just love ’em. One more set will take me through until I’m 50 years old.”

When I asked Blixt if he thinks amateur golfers switch out irons too often for new models, his answer spoke volumes about the importance of club fitting.

“I feel like a lot of amateurs, what they do wrong, in my opinion, they just go buy a set off the rack,” Blixt said. “They don’t really have anyone test out what they actually need. They just go for looks. Which is part of the process, but sometimes the irons may not work for them. Then they try to play whatever the iron is giving them, instead of fitting the iron to them.”

Blixt suggests getting an iron fitting to determine what irons truly suit your swing best. He also recommends getting your lofts and lies checked regularly to make sure they haven’t gotten bent throughout the course of play and practice. If your loft or lie angle changes by just a degree, it could have drastic effects on turf interaction and flight pattern.

He also says to think about that one iron you hit better than any other iron in your set. Blixt recommends heading to a professional fitter or club builder to get the exact specifications of that club: the loft, lie angle, head weight and swing weight. Then, you can match the rest of your iron set to that iron. That way, you’ll have an iron set that matches perfectly together with your favorite iron in the bag.

Whether your irons are 10 years old like Blixt’s, or they’re a completely new release, make sure that the irons complement your swing and preferences, and that they match up together throughout the set.