‘Harry was pleading with me’: Rory McIlroy was begged not to hit rocks shot 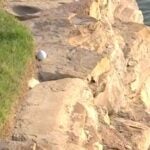 Rory McIlroy's ball on Saturday after his tee shot on the 17th hole at Jumeirah Golf Estates.

Rory McIlroy and Harry Diamond looked up, looked back and never once looked forward. During last year’s Northern Trust event, player and caddie had had their ball nestle up against a steep bank left of a green, only for McIlroy to ricochet his ball off a rock on the ensuing shot, and the ball to end up in the water behind him. “Oh no,” the announcer said on the PGA Tour Live broadcast.

On Saturday then, McIlroy and Diamond looked back in order not to look back again. During the third round of the DP World Tour Championship, McIlroy’s tee shot on the par-3 17th rolled off a slope left of the green, somehow struck a rock fronting the water twice and settled on another rock, inches behind a small grass embankment. And player and caddie were having flashbacks.

“Yeah, Harry was pleading with me not to hit it,” McIlroy said. “Just go back; we can make four; we can make four at the last. It was reminiscent — you guys might have it on tape. I missed the second hole in Boston right a couple years ago when I was playing with Tiger [Woods], and I was trying to hit it out of the hazard, similar sort of thing and went straight into the water.

“Harry and I were both thinking of that when we were looking at it.”

While Diamond learned not to hit the shot, McIlroy found a way how to.

Shaking off his caddie, the four-time major champion caught his ball clean, it landed just over the left greenside bunker and rolled just off the right side of the green. From there, he chipped to within a foot, and he’ll begin Sunday’s final round of the season-ending event on the European Tour with a one-shot lead.

“I just thought if I got enough on it, hit a descending blow on it, it would basically hop up and do what it did,” McIlroy said. “I thought best I could do was in that far trap, but it just stopped short of that. …

“It was an important four.”

On the 17th tee, after he swung, McIlroy dropped his left hand from his iron on his follow-through and froze. When he reached the ball, he and Diamond stood over it, Diamond bent over to check the gap between grass and ball, and McIlroy took a few practice swings. Diamond then backed off.

“It’s just on a slight downslope,” an announcer said on the Golf Channel broadcast. “That’s why it hasn’t gone into the water, on the rock. If it was on a flat lie, I think he’d get the club under it better. It’s going to hit the bank. It’s just a case of — because he’s thinking he might knock it in the water on the other side.

“Or pop up and hit him on the leg,” another announcer said.

The scene was reminiscent, too, of another McIlroy-Diamond exchange. Earlier this year, while protecting a two-shot lead at the Wells Fargo Championship, McIlroy had hit his drive on the 18th at Quail Hollow into a penalty area, Diamond convinced him to take a drop rather than hitting, and McIlroy held on.

“Harry was awesome out there today, especially that decision on the last,” McIlroy said. “I was ready to get in there and try to play that with a lob wedge, and he was sort of like, ‘Let’s take a step back, let’s think about this. Where’s the best place you’re hitting your third from?’ So he sort of calmed me down and slowed me down a little bit and said, ‘Pal, let’s just think about this a little bit.’”