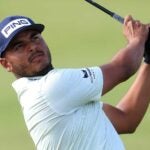 Sebastian Munoz hits a shot on Thursday on the 16th hole on the Seaside Course at Sea Island Resort.

Five-unders? OK. Four-unders? You’ve got work to do. Three-unders? Eighty-two (!) players are in front of you. On a day one player called a Chamber of Commerce day, visitors to Sea Island, Ga., were greeted by birdies and eagles. Here are three things you need to know after Thursday’s first round of the RSM Classic, played on the Seaside and Plantation Courses at Sea Island Resort.

The lowest of the low was Sebastian Munoz, who birdied five holes on the front nine on the Seaside Course and birdied three and eagled one on the back on his way to a 10-under 60 and a one-shot lead over Mackenzie Hughes, Scott Stallings, Zach Johnson and Chez Reavie. It was Munoz’s lowest career round by six shots, and he didn’t have a single five on his scorecard.

“I feel like my iron play was really good, and my putting like from 10 feet was really good,” Munoz said. “I gave myself a ton of chances from the right places, and I was reading the lines pretty good. Sometimes these greens, as good as they are, they’re tough to read, so I feel like I did a really good job of like picturing what was with my speed, and it worked pretty good.”

At eight-under were Russell Henley, Jhonattan Vegas, Corey Conners and Talor Gooch, and 11 players were at seven-under.

Why did everyone go low?

And why was Sea Island so generous? It’s best defense, the wind, took the day off. But it’s scheduled to work on Friday. And since the RSM is played across two courses, players believed officials gave them a break with pins during the first round in advance of a breezy day two.

“Tomorrow is not — sounds to me like it’s going to be the complete opposite of today,” Johnson said. “They’re talking not just wind, but gusts. I’ve heard anything from 25 to 35. I don’t know what’s coming. And arguably a 180, but you could see it.

“I would also throw in the fact I was talking to a couple rules officials yesterday, and they kind of brought it up, I didn’t have to bring it up — when you’ve got two courses and you’ve basically got to play them the exact same and you’ve got a day where it’s absolutely benign, the flags are just drooping, and then tomorrow the pins are going to be whipping, you’ve got to be set up for the pins whipping, you know?

“So we had tee boxes today — the 14th hole was the best example. That’s one of the hardest, best holes on this golf course, arguably on the PGA Tour. More times than not, it’s a driver and a mid- to long iron, and today it was a 3-wood, wedge because the tees were up, slightly down off the right, and it’s just not normal. I mean, I’ve hit — I’m assuming I’ve hit a head cover in there at some point, but a lot of 6s and 5s. So they’re prepared for tomorrow, and that’s what they had to do. The unfortunate thing is you see a lot of low scores. If you don’t like low scores, but I like low scores.”

But not everyone went low

One-hundred-and-forty-one players shot par or better. But a few didn’t. Among them were former Ryder Cupper Alex Noren (one-over 71) and Kevin Kisner (four-over 76), who won the RSM in 2016.

Rory Sabbatini, meanwhile, was DQ’d for a violation of Rule 4.1 Golf Channel’s Rex Hoggard tweeted that Sabbatini, the Olympic silver medalist, had “a sticker attached to his club face that is not allowed under the Rules of Golf.