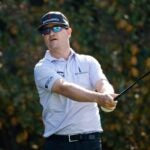 The 2021 RSM Classic continues on Saturday with the third round at Sea Island Resort in Sea Island, Ga. You can find full Round 3 tee times for the tournament at the bottom of this post.

Thirty-year-old Talor Gooch has posted nine top-10 finishes over the course of his PGA Tour career, but he has yet to notch his maiden victory. Perhaps that will change this week, as Gooch, 13 under par through 36 holes, holds a one-shot lead at the RSM Classic halfway point.

Gooch has been on a hot streak of late, with four top-11 finishes in his last five events. But with two rounds remaining, he’ll have plenty of competition for the title.

John Huh and Sebastian Munoz are tied for second, one shot back at 12 under overall. Two more players are two back at 11 under, and three more are 10 under, including two-time major champion Zach Johnson.

Gooch will play the third round alongside Huh and Munoz in the final grouping at 11:15 a.m. ET, while Johnson will tee it up two groups ahead with Seamus Power and Tom Hoge at 10:53 a.m. ET.

Check out complete third-round tee times for the 2021 RSM Classic below.

How to bet on the RSM Classic