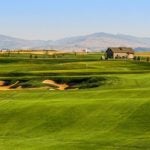 TPC Colorado measures at nearly 8,000 yards from the tips.

The Korn Ferry Tour heads to the Rocky Mountains this week for the TPC Colorado Championship at Heron Lakes. Contested at TPC Colorado, the Arthur Schaupeter-designed course will play host to the PGA Tour’s top development tour for the second straight year.

The course made headlines for its staggering length last year with an official scorecard yardage of 7,991, including the par-5 13th which plays at an outrageous 773 yards. You read that right — the hole measures out to nearly 800 yards. Yes, the course sits at roughly 5,000 feet of elevation, but that’s still pretty deep. At 791 yards, the 13th measures as the longest hole ever for a PGA Tour-sanctioned event, 83 yards longer than its next closest competitor.

But is the course still too tame for pro golfers? Despite its gaudy length, TPC Colorado posed few problems for the Korn Ferry Tour pros last July. Players dissected the links-style track, ending with Nelson Ledesma claiming the crown at a healthy 15-under. In fact, the course didn’t even crack the top 10 toughest courses on the Korn Ferry Tour circuit last season, playing to a scoring average of roughly even par — 71.912, good for 11th out of 29 courses.

And the monstrous 13th, while difficult, wasn’t nearly the challenge one would think. The hole did play over par for the week last year (5.072), but it only ranked as the eighth-toughest hole on the golf course. For the season, it wasn’t the most difficult par 5 either, playing as the third-hardest par 5 on the Korn Ferry Tour last season.

Looking at the statistics, it is interesting to note that there were no “other” scores recorded, and it had the fewest doubles of any hole in the top five. This can be attributed to a number of things, with one being there is no real trouble on the hole. Sure, you could lose a ball if you get extremely loose on a shot, but these are pros we’re talking about. Another reason being that none of the players can go for the green in two — the hole is a one of the few par 5s that is still a three-shot hole for all competitors. Players are content to lay back and play to a number they like, minimizing the big number.

GOLF senior writer Alan Shipnuck made the bold claim a few years ago that to truly test Tour pros, courses would have to be stretched out to some 9,000 yards. While that mark might not be feasible, his theory holds some weight when looking at how TPC Colorado played last summer. We’ll see how it holds up this time around.