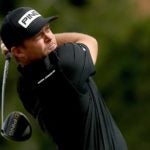 Daniel Summerhays tees off at the Utah Championship.

Daniel Summerhays had already made up his mind. He was retiring as a touring pro. The 36-year-old had decided this week’s Utah Championship on the Korn Ferry Tour would be his last.

A fitting finale, for sure. Summerhays, who spent eight years on the PGA Tour and earned more than $9 million, was making a career change, deciding to teach at his alma mater, Davis High School, and coach the golf team. He grew up on Oakridge Country Club in Farmington, Utah, the site of this final event, and it’s also where he won his first Utah State Amateur title at age 16 (the youngest ever to do so). But this start would be his last, he said. And then he nearly won the golf tournament.

Summerhays caught fire in the final round and signed for a nine-under 62, the low-round of the day. That gave him the clubhouse lead at 20 under, and it almost stood. Hours after Summerhays finished, Paul Haley II and Kyle Jones both got in at 20 under to force a playoff. Summerhays had to wait almost three hours until the playoff started. He said he watched all of the action on TV.

“I think my heart was pounding more then than it was [on the course],” he told Golf Channel afterward. “The waiting game isn’t easy.”

The Cinderella story never came to fruition, though. Summerhays bogeyed the first playoff hole to bow out, and Jones won it a hole later with a birdie.

“Oh man, to be in that position, to be able to have a little bit of extra golf was spectacular,” Summerhays said.

Summerhays, whose nephew, Preston Summerhays, won the 2019 U.S. Junior Amateur, said he’s looking forward to more time at home, which he realized he missed even more when he was stuck inside amid the coronavirus pandemic the past few months. Entering the week, Summerhays had one Korn Ferry Tour victory in 126 career starts. He nearly had his second as the hometown favorite. He was asked earlier in the week what would happen if he won.

“I’ve thought about that,” he told the Deseret News earlier this week. “I was prepared last year and feeling, if I win, maybe I’ll ride off into the sunset and call it good. If I won this week, I would probably play a couple of more events throughout the summer. I still like to compete and I feel like my game’s pretty solid, but as far as the grind of travel, week in and week out, I’m kind of spent that way. When it comes time for school in August, that’s where I’ll be.

“You always feel like you have a little bit more in the tank or you should have done a little better. But when I truly step back and look at it, I shake my head in disbelief and say, ‘Wow, that’s pretty amazing.'”

And his Sunday 62 wasn’t bad, either.