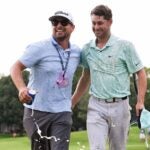 The birdies could be bringing beer showers with them at this year's Visit Knoxville Open.

Some fan engagement ploys are just that: ploys, gimmicks, distractions — superficial methods to get more “butts in seats.” But some fan engagement strategies rise well above that standard. Some, like the one on display at the Korn Ferry Tour’s Visit Knoxville Open, are nothing shy of genius.

This weekend, fans who stop by Holston Hills Country Club will have the opportunity at the deal of the year in professional golf. For every birdie made in the event, beers will be $2 for 30 minutes.

It’s a campaign the Visit Knoxville Open is calling “Birdies for 30,” and it works like this: every time a player makes a birdie, tournament staffers raise a huge flag outside the course’s clubhouse. Every time the flag goes up, beer and seltzer are $2 for the next 30 minutes. Once the flag goes back down, drinks return to their full price.

That’s it. No strings attached. Just show up, cheer on your favorite pros, and enjoy a few $2 pints on the house.

The announcement follows a recent trend in professional sports toward more affordable concessions, particularly at the minor league level. After years of soaring concessions, stadiums and arenas have begun to reintroduce “value” selections to their menus, offering cheaper food and drink alternatives to incentivize spending. Some venues — like the Mercedes Benz Stadium in Atlanta — have even taken that to the extreme, offering dirt-cheap pricing in the hopes fans will spend more and be more inclined to return.

Of course, none of those options reach the level of affordability offered every year at the Masters. Augusta National has maintained its famously cheap concessions for decades, and its menu items have earned something of a cult following among golf fans. Even after an inflation-crazed start to 2022 in the United States, Pimento Cheese sandwiches maintained their long-standing price of $1.50 at Augusta National. At the Masters, the cost of a beer, a sandwich and a snack regularly stays safely below $10.

With its $2 beers, the Visit Knoxville Open harkens to a different kind of golf concession deal: the kind designed to get fans excited to attend an event and enthusiastic about the results during it. In an era defined by $15 stadium drinks, that’s a breath of fresh air. And, one can only hope, an effort worthy of drawing a record crowd.