Last year, my colleague Alan Shipnuck tossed out a working theory: to truly test today’s professional golfers, tournament courses need to stretch to 9,000 yards. Nine. Thousand. Yards. “I’m not saying a 9,000-yard course is a good idea, only that it has become a necessity,” he wrote. The idea was met with ridicule. But this week, the pro ranks take one step closer to making that a reality: the Korn Ferry Tour heads to TPC Colorado, which will play at 8,000 yards, including one particularly meaty par 5.

To be clear, the course doesn’t officially crack the 8,000-yard barrier, at least not without a couple back pins. The official listed yardage is 7,991, nine yards shy of history. And we’re talking Colorado, where balls fly uncommon distances — just ask the Rockies. But still, this week marks an extra-big footprint and some extra-long fun. And maybe a look at the sorts of yardages we should become accustomed to.

This is the debut of the TPC Colorado Championship at Heron Lakes, a new event with a new host course in the Heron Lakes development in the town of Berthoud, Colo. The first hole is a 635-yard par-5, and it’s still a full shot shorter than the par-5 13th, which clocks in at 773 yards. “Longer Still,” the hole is called. That seems appropriate.

The tee shot on No. 13 is wide open, allowing players to swing away. On their second shots, they’ll be challenged by a “Hell Bunker” or forced to lay up to 200 yards, according to the course guide. Frankly, laying up to 200 yards on a 773-yard hole sounds like a heck of an accomplishment. But for these young bombers, no hole — or course — seems to be long enough. 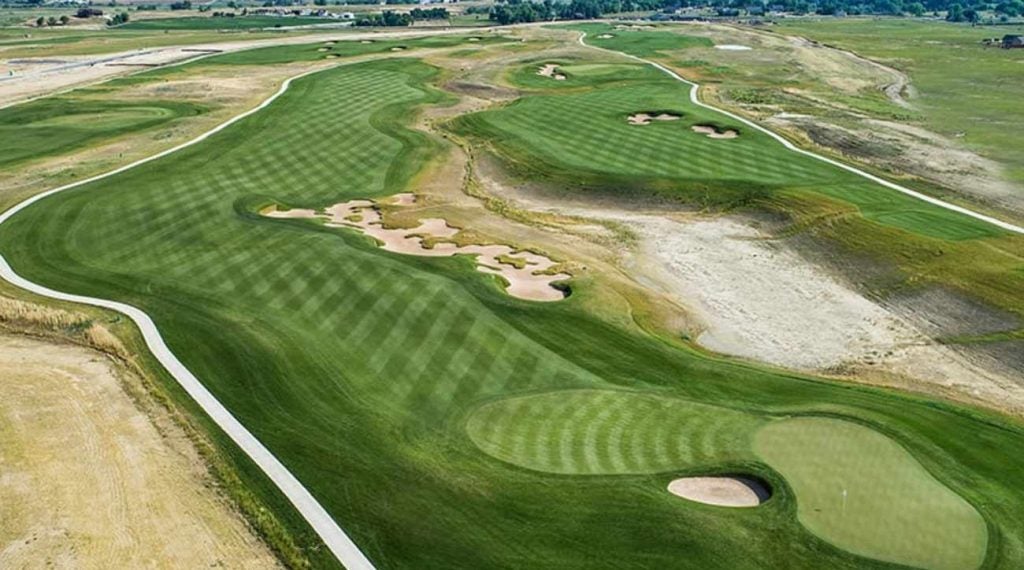 TPC Colorado is clocking in just shy of 8,000 yards, including the 773-yard 13th, pictured above.
TPC Colorado

It was just 13 years ago that Jim Furyk made this proclamation to the AP: “Eight thousand? It will happen someday. I’ll be long gone and retired. I have a feeling they will probably tone things back probably quicker than we’ll get to 8,000 yards.”

Well, Furyk is still in the world’s top 50. He’s playing in next week’s Open Championship. And he’s probably not upset to be missing this Coloradan beast.

Edward Loar was among the Korn Ferry pros to point out the eye-popping 13th. “Better bring your walking shoes this week,” he wrote on Twitter. The balls fly further at 5100 feet of elevation, where Berthoud sits. The course effectively plays something closer to a typical 7,000 yards. But the walking sure isn’t any easier than usual.

Better bring your walking shoes this week on ⁦@kornferrytour⁩ 🤭 pic.twitter.com/LdJ1wMHx3A

Perhaps the most interesting aspect to TPC Colorado’s layout is the fact that by the time players get to No. 13, they’ve already encountered three par-4s under 400 yards — each of which becomes eminently drivable in the right conditions.