WATCH: Caddie gloriously bellyflops into the water after win 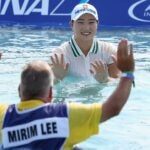 Mirim Lee and her caddie, Matt Glczis, turned and looked at each other on the right side of the 18th green on the Dinah Shore Tournament Course. They had looked at each other often over the past hour on the green. Lee entered the last hole of the ANA Inspiration two shots back before stunningly chipping in for eagle to make a playoff, and she birdied the first extra hole to win.

Lee and Glczis turned back from each other and looked ahead. Since 1988, winners of the tournament have entered Poppy’s Pond, the concrete-lined pool that is part of Champions Lake, which surrounds the 18th. Some have waded in. Some have dove in. In 1996, Patty Sheehan cartwheeled her way in.

Glczis took eight steps toward the water, each one increasing in speed. His right foot sprung him forward. He extended both arms and both legs in mid-air. The front of his body smacked the water.

Glczis’ plunge was as good as Lee’s play.

Lee took 13 steps in. “Oh my God. Oh sh–,” she said on her final few. She dipped in. Lee waded around, then turned to some people calling her name and waved.

“Usually I’m not afraid of water, but the pool looked a little deep, so it’s true that at that moment I hesitated a little bit,” she said afterward.

Lee and Glczis turned and looked at each other again. They high-fived and walked out.