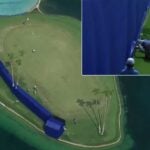 The blue wall beyond the 18th was an easy target for players looking to get a free drop.

There was a soft, brewing discussion this week about the man-made wall beyond the 18th green at the ANA Inspiration. The unnatural obstruction is in place to offer sponsorship value for ANA. On Sunday, it played a pivotal role in the fate of the major championship.

Mirim Lee, who had chipped in twice already Sunday at Mission Hills, did so once again from just behind the 18th green after taking relief from the wall when her approach banged into it. Without the wall there, her approach likely would have trickled into the water beyond the green. Instead, Lee did just as many other pros did this week: she used plenty of club to clear the water knowing there was the safety of a backboard behind the green.

The result was a magical eagle that vaulted her into a share of the lead at 15 under. The stuff of legend, if only it came entirely naturally. But that’s not all.

In the final grouping, one group behind Lee’s, Brooke Henderson’s 3-wood approach into the 18th green bounced under the wall. Two hops and gone from sight. Henderson was forced to crawl on the grass and identify her ball beneath the wall, then take free relief on the green side of the structure. She was able to pitch up and make birdie to tie for the lead as well.

Our Alan Shipnuck is on site this week and during the heat of the moment Sunday spoke with Lee’s caddie about their strategy to use the wall.

Judy Rankin discussed the purpose and thought behind the wall on the Golf Channel broadcast, claiming that ANA and tournament officials intended to recreate what in normal years is a grandstand. But in their attempts to do so, they created a structure that Rankin described as “way too artificial.”

Nelly Korda had missed the fairway off the tee and was forced to lay up, therefore not needing the backboard. She two-putted for a par and a piece of the playoff, which was won by Lee just one hole later.