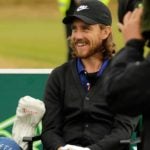 Although the return of the PGA Tour isn’t until next week, there were still golf competitions being held this week — albeit, it was a little different from the golf we’re used to.

While stateside players have been preparing this week to make the journey to Texas to restart their season, a handful of Tour players across the pond were busy competing in the Paddy Golf Shootout, an “epic pro-am golf tournament to kick off summer of sport.”

“It’s golf … but not as you know it,” according to the Paddy Sports website. “The Premier League is coming back, so think of this as an opening ceremony to a mega summer of sport.”

The premise of the event was simple: five pros and five celebrities teaming up and competing in a series of wacky and goofy skill-based challenges. The pros in the event were Tommy Fleetwood, Andrew ‘Beef’ Johnston, Thomas Bjorn, Carly Booth and Paul McGinley, while the celebrity roster consisted of Harry Kane, Piers Morgan, Peter Crouch, Freddie Flintoff and Jamie Redknapp.

This motley crew of pros and celebrities then went through a series of unorthodox skill-based challenges such as golf pong, a Happy Gilmore long drive contest and closest to the pin. And in the second half, they competed in the Power Paddy Shootout. Here are a few of the best moments from the event.

With an assist from the trees, Beef put the points of the board for his team. All he’s missing is the hockey jersey.

Piers Morgan shows off his speed

Credit to Piers Morgan here. The broadcaster emptied the tank as he and Tommy Fleetwood tried to earn the points in the fastest hole competition.

Just minutes after Tommy Fleetwood set the record, Paul McGinley swooped in and snatched the crown from the Englishman.

Check out the rest of the highlights below.