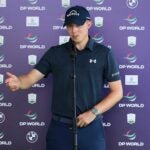 Matt Fitzpatrick is vying for the Race to Dubai title this week, but Ryder Cup revenge is top of mind.

The U.S. team’s dominant win at 2021 Ryder Cup at Whistling Straits — and Team Europe’s devastating loss — is already two months in the rearview. But for one European team member, the sting of that loss is still fresh in his mind.

Twenty-seven-year-old Matt Fitzpatrick played in three matches at Whistling Straits, losing all of them. It was his second appearance on a European Ryder Cup team, the first being in 2016, when the U.S. team also triumphed. Going 0-2 in Ryder Cups as a European (and 0-5 in matches) is a rarity in the modern era of European dominance.

It’s no surprise then that at this week’s DP World Tour Championship, vengeance is on Fitzpatrick’s mind. And given that this tournament concludes the European Tour season and the season-long Race to Dubai, Fitzpatrick actually has a chance to make good on that revenge.

Much like the FedEx Cup on the PGA Tour, for the Race to Dubai players compete over the course of the season to earn points at each event. The player at the top of the rankings at season’s end earns the Race to Dubai title and a check for $1 million.

What is drawing Fitzpatrick’s attention is the man currently on top of the Race to Dubai rankings heading into the finale: American Collin Morikawa. Morikawa, of course, was one of the stars of the U.S. Ryder Cup team this year, going 3-0-1 in his debut in the team event.

If Morikawa were to win the Race to Dubai, or former U.S. Ryder Cupper Billy Horschel who is currently No. 2, he would become the first American to capture the season-long title. That would be too much American success for Fitzpatrick to handle.

“It would be nice to stop the Americans from winning it and would be good to stop history, wouldn’t it?” Fitzpatrick told The Telegraph in a recent interview. “Go on, then – this one’s for Europe, if you like!”

Currently Fitzpatrick is No. 6 in the standings. If he wins the DP World Tour Championship and Morikawa finishes out of the top 9, the English pro can steal the Race to Dubai title and get some measure of the revenge he seeks.

Fitzpatrick also told The Telegraph, “I really fancy my chances,” and history backs up his confidence. He’s the defending champion this week, having won the 2020 DP World Tour Championship to finish 2nd in last year’s Race to Dubai. Not only that, but it was his second W in the event, having claimed the title in 2016 as well.

“I have great memories here,” Fitzpatrick told The Telegraph, “and it is a good feeling when you come back to a place you know like the back of your hand. I could probably play it blindfolded.”

Adding further inspiration to Fitzpatrick’s quest is the fact that Morikawa is not a full-time member of the European Tour. In fact, he only played in two regular-season events in 2021, the Omega Dubai Desert Classic in January, where he finished T68, and the Scottish Open (T71).

His top spot in the Race to Dubai ranking is thanks to his performance in the WGCs and majors, which are co-sanctioned by the PGA and European Tours. That includes two wins by the World No. 2, at the WGC-Workday Championship in February and the Open Championship at Royal St. George’s in July.

With Jon Rahm (3rd in the Race to Dubai) sitting this week out, Europe has only two other players with the opportunity to beat out Morikawa and Horschel for the title, Tyrrell Hatton and Paul Casey, with Hatton having the best chance entering the week at No. 4.