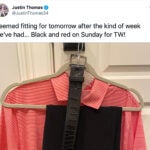 Justin Thomas' Tiger Woods tribute for Sunday's final round of the WGC-Workday Championship.

Tiger Woods, recovering from surgeries after a car accident earlier this week, is not expected to be at Sunday’s WGC-Workday Championship.

His colors will be.

Multiple players, including Justin Thomas, Rory McIlroy, Patrick Reed and Collin Morikawa, said Saturday that they will wear red and black — Woods’ longtime Sunday colors — in tribute to the 15-time major winner during the final round at the Concession Golf Club in Bradenton, Fla. In addition, Golfweek reported that Annika Sorenstam, playing in her first event since 2008, will wear the colors at the LPGA’s Gainbridge LPGA, and GOLF’s Jonathan Wall said that Bryson DeChambeau, Jason Day and Matt Kuchar will play a Bridgestone ball with “Tiger” stamped on the side.

“Seemed fitting for tomorrow after the kind of week we’ve had… Black and red on Sunday for TW!” Thomas tweeted on Saturday night.

On Tuesday, near Los Angeles, Woods was involved in a single-car accident that has required him to undergo multiple procedures to his right leg, ankle and foot. Woods’ social media accounts said Friday that “Woods is now recovering and in good spirits.”

In tribute to Woods, Morikawa, the Workday third-round leader, and McIlroy and Reed, who will be paired together on Sunday, told Golf Channel that they will wear red and black. As of Saturday night, it was unclear if other players would join. Max Homa, who won last week’s Genesis Invitational and received the trophy from Woods, the tournament’s host, tweeted that he “unfortunately didn’t pack any red and black for this road trip (obviously didn’t know the news til arriving), so I will try and pay my respects to TW tomorrow with some really great final round #golf. Hope to see a lot of red and black out there!”

McIlroy, when asked on Wednesday if there was “talk among the players as to how to pay tribute to Tiger,” said: “I guess it’s — like you say ‘pay tribute to him.’ He’s not gone. I don’t see — like he’s been in a very bad accident. We’re very lucky that he’s still here. I feel like we should pay tribute to him every day for being on the PGA Tour and what he’s done for golf.”