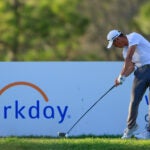 Collin Morikawa hits his tee shot on Saturday on the 16th hole at the Concession Golf Club.

The leader changed his putting grip last week. He had been 190th on the PGA Tour in Strokes Gained: Putting. “I mean, simply, I’m trying to get better and I’m trying to figure out what works and what doesn’t,” he said. “It’s just like someone trying to gain distance or do something with their golf game. It’s the same thing with putting — I’m trying to get better and I’m trying to find something that is more consistent, that rolls the ball a little better.” The leader may have found a bit more than that. Here are three things you need to know after Saturday’s third round of the World Golf Championships-Workday Championship at the Concession.

Morikawa, despite two late bogeys, would shoot a five-under 67 to take a two-stroke lead over Brooks Koepka and Billy Horschel. Webb Simpson is three back, and Rory McIlroy and Patrick Reed are four behind.

“I think anytime you have birdies like that you’re just kind of in the zone,” Morikawa said. “Golf was really simple. I was hitting great shots, got away with a great birdie putt that kind of hit the back of the cup I think on 6, but other than that, I was just hitting quality shots. I was hitting my numbers, hitting my spots and that’s what feels great for literally the past couple weeks is that’s what I’ve been seeing.”

Brooks Koepka and Billy Horschel are two behind

Koepka, who entered the round with a one-shot lead, battled neck pain that he’s been dealing with for a few weeks and bogeyed his first two holes before finishing with a two-under 70.

“Today was probably the worst it’s been in a while, but whatever,” Koepka said of the neck pain. “Gave a few shots back to the field. Kind of loosened up a little bit more, but not quite where I want.”

Horschel moved within two after a birdie on 16 and an eagle on the par-5 17th, where he hit his second shot, from 259 yards out, to within 12 feet. Simpson is three behind after a 69, and McIlroy and Reed are four back after shooting 66 and 69, respectively.

Viktor Hovland, who quadruple-bogeyed the par-4 9th, his final hole, on Friday, bounced back with a 66 — and a par on the 9th — and he is five shots back of Morikawa.

“I was thinking about it,” Hovland said of the 9th. “I hit a better drive today and I hit a nice approach shot and I thought to myself I’m probably not making an 8 from there.”

Among other players, Justin Thomas is eight shots back, Bryson DeChambeau is 12 behind, and Dustin Johnson is 14 back.