‘He has full control of the ball and some of us might say we do:’ Tiger wows Collin Morikawa 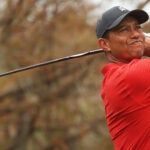 Since he turned pro in June of 2019, Collin Morikawa has played four rounds with Tiger Woods — the first two rounds at both the Farmers Insurance Open and the U.S. Open last year. Morikawa was walking side by side with the player whom, just months earlier, he was watching on TV.

“I’ve grown up watching Tiger my entire life, and all I could dream about when I was a little kid was to be able to play with him when he’s on the PGA Tour, and I’ve made that dream a reality,” Morikawa said before the Omega Dubai Desert Classic.

Where one dream ended, another began.

“But he does it at ease, and every shot comes at ease and there’s no extra effort to hit a certain-type shot. Hopefully I’m able to get my game there sometime.”

Sometime may be soon. Recently, when asked by GolfTV to develop his “perfect player,” he picked Woods for putting, Patrick Reed for short game and Rory McIlroy for driving. And himself for iron play.

At 23 and having played not even a full two years on Tour, Morikawa has won three tournaments — the PGA Championship and Workday last year, and the Barracuda Championship in 2019. At the PGA, he became the third-youngest winner of the event since it began its stroke-play format (1958), while at the Workday, he defeated world No. 3 Justin Thomas in a playoff. Morikawa also ranked in the top 20 on Tour in four of its Strokes Gained metrics — off the tee (19th), approach the green (second), tee to green (fifth) and total (14th).

While Morikawa grew up watching Woods, he said this week he would not watch Woods, the two-part documentary released in early January by HBO. It features no interviews with its subject and leaned on Jeff Benedict and Armen Keteyian’s 2018 Tiger Woods biography.

“You know, we all know the history of what happened. Facts are facts,” Morikawa said. “But for a Tiger documentary, unless he was going to be the one narrating it, I really have no interest.

“To be honest, the best way you can get to know someone is by talking to them, right,” Morikawa added. “You’re getting to know me through this interview. I’m getting to know you by the questions you’re asking. And for me to be able to ask Tiger personal questions, face-to-face, about golf, sports, family, whatever it may be, that’s all that matters to me. I’ve idolized him and he’s been a role model or a huge reason why I’m here today.”