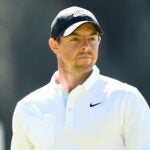 Rory McIlroy at the Genesis Invitational.

BRADENTON, Fla. — Walking the range at Concession Golf Club, you’d have been forgiven for thinking it was a normal day on the PGA Tour.

There was Xander Schauffele, strolling down the range, stopping to stare down a Bryson DeChambeau tee shot. DeChambeau, who spotted Schauffele out of the corner of his eye, gave a mischievous look, reared back and gave a mighty lash — but missed completely, earning a laugh from his Presidents Cup teammate. Range humor. Down the row was Patrick Reed, trying on a new “Captain America”-themed gaiter, a gift from swing coach David Leadbetter, who stood back, admiring. One spot further was Rory McIlroy, conducting driver tryouts with three different TaylorMade Sims lined up against his bag.

A hot west Florida sun beat down on the WGC-Workday’s pro-am, with Tour members and average Joes teeing it up on the final day of prep before another week in the arena. Most everything looked the same.

But everyone on site knew it wasn’t.

Tiger Woods’ longtime friend Notah Begay pulled up behind the range in a Golf Channel cart. He wore a red blade-collar golf shirt and black pants, a fitting tribute to Woods’ trademark ensemble. Players stopped by, asking if he’d heard more news than what was released early this morning. He hadn’t. Nor had anyone else. But that not-knowing hung like a haze in the clear-blue Bradenton sky, obscuring all the rest.

Every conversation on site, no matter where it started, swerved quickly to the topic of Woods. The shock of the crash-scene photos and the breathless news-cycle updates had built uncertainty and fear; only after midnight, when Woods’ camp released a statement saying he was stable, could anyone breathe easy.

“He’s not Superman,” he reminded the virtual crowd. “He’s a human being, at the end of the day. And he’s already been through so much. At this stage I think everyone should just be grateful that he’s here, that he’s alive, that his kids haven’t lost their dad. That’s the most important thing. Golf is so far from the equation right now, it’s not even on the map at this point.”

He’s right, of course. On Tuesday, every detail that came out — photos, aerials, deputy testimony — served to illustrate just how dramatic the crash had been, and how easily Woods’ horrific injuries could have been even worse. This is a time to be grateful for Woods’ life, and to ignore where his golfing future may or may not fit in.

But McIlroy was also put off by another aspect of the story’s coverage, something many people had been wrestling with.

“He’s not gone,” McIlroy reminded one media member, who asked if he’d be paying tribute to Woods. “He’s got some pretty bad injuries, but he’s going to be okay. It’s not as if — I was looking at some of the coverage yesterday and they were talking as if he was gone. It’s like, he was in a car crash. It was really bad, he’s very fortunate to be here, which is great, but I mean, that’s the extent of it.”

That got at the great conflict everyone was feeling. Even after Woods’ outlook improved, it still felt like everyone on site was collectively mourning. The importance of Woods surviving the crash was, obviously, the thing that mattered most. But if the crash has claimed the future of Tiger Woods the golfer, well, of course that’s a big deal, too. He’s the game’s greatest player, and just 48 hours before we were mulling his Masters chances. The potential end of his career is no small thing to mourn.

McIlroy has always been keenly aware of what Woods brings to every golf tournament he plays — every pro is — and on Wednesday again cited “that extra dimension” that nobody else in the game comes close to matching. But he also recognizes that, accident or not, the Tour has already had to adjust to the idea that most of its events won’t feature its signature golfer.

“It’s inevitable that one day he won’t be a part of it, and that’s going to be just something that the game of golf and the Tour is going to have to deal with and adapt to,” he said, noting that Woods will still be a part of the game for years to come, even if he’s not holding a club.

Still, McIlroy knows better than anyone the force of will that Woods has tapped into before. He’s seen it firsthand.

“I had lunch with Tiger in March or April 2017, just after he had the fusion,” he remembered. “And then to work his way from hardly being able to walk or stand to being able to get his game back into shape. He won the Masters two years later, in 2019.

“I don’t think people to this day, people don’t realize — well, a few of us out here do, JT, Rickie, Dustin and myself, the guys that are in Florida that have gotten a little bit closer with him — the struggle and the things he had to deal with to get to that point to win Augusta in 2019.”

There’s no use in speculating on anything Woods-related, and McIlroy didn’t. Post-presser, he shifted his focus as best he could to the task at hand: playing this week’s tournament. But his musings offered an important reminder about how we should think about Tiger Woods. Three, actually.

First, Woods isn’t Superman. Second, he’s still very much here. And third, that it’s never, ever smart to count him out.