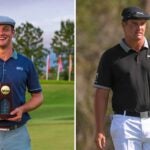 Bryson DeChambeau is a different golfer than he was at Concession in 2015.

BRADENTON, Fla. — The last time Bryson DeChambeau was on the driving range at Concession Golf Club, he was filled with nervous energy. It was the 2015 NCAA Championships and DeChambeau, SMU’s eccentric ace, had posted the individual clubhouse lead at eight-under 280. Then he waited in agony as Washington’s C.T. Pan tried to track him down.

“I remember being on the practice range and when I heard the crowd go “Ohhh,” because [Pan’s putt] lipped out or whatever,” DeChambeau remembered ahead of this week’s WGC-Workday. “The team ran over and just dumped water on me because they knew I had won. That’s my fondest memory right there.”

That was six years ago. Forty pounds ago. Twenty million dollars and seven PGA Tour titles and one major championship ago. And now he’s back, marveling at how far he’s come. Because before he became an NCAA champion, DeChambeau had no idea that all of this was in his future.

“I didn’t even know if I was going to be playing golf for the rest of my life before the NCAAs,” he said. “I was really good and I would have tried to play on Tour, but a lot of things got expedited when I won the NCAAs and the U.S. Amateur [later that year].”

His return to the site of a former triumph is a chance to reflect. DeChambeau used words like “blessed,” “pleased,” and “appreciative.” The on-course accomplishments speak for themselves. The way he’s shifted the mentality of so many pros adds another fascinating layer to his already-layered pro career.

Back then, DeChambeau weighed 195 pounds. He hit it plenty far, but that meant hovering around 170 mph of ball speed with his driver. Now? He’s 230 pounds, a behemoth for the PGA Tour. He easily reaches 200 mph of ball speed. He frequently cites long-drive Kyle Berkshire as a trusted advisor. He’s the reigning U.S. Open champion.

In turn, he’s playing a decidedly different golf course this week than he was in 2015. It plays faster and shorter, he says. Where he needed driver then, now he can use 4-iron. But that doesn’t necessarily mean the game is any easier.

DeChambeau opened his week with five-over 77 on Thursday. He made six bogeys and a triple. He found bunkers, trees, water, bushes, swamps. Golf is a humbling game. Just because you’re better than you were six years ago doesn’t mean you’re better every day. It doesn’t mean that everything is simpler.

As he begins his 2021 season in earnest, DeChambeau has already realized there are parts of his game he needs to dial in to compete at some of the Tour’s more exacting courses. That means dialing back driver from time to time. It’s the reason he’s cut back from 245 pounds to 230, to keep up his energy over four rounds. Being long off the tee helps — but weeks like this, harnessing that length is paramount to survival. Matthew Fitzpatrick and Webb Simpson, two poster boys of patience, beat DeChambeau by 11 on Thursday.

As a lifelong scholar of the game, that’s something DeChambeau can appreciate. Even on familiar turf, there’s plenty more to learn. And this week’s course is a particular brutish teacher.

“If you’re not hitting it well and straight off the tee, it’s ‘The Concussion’ for a reason,” he said.

Some days more than others.