‘I was trying to give Tiger something to laugh about:’ Patrick Reed tops a shot 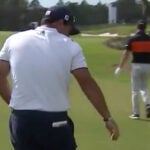 Patrick Reed after his second shot on Friday on the 3rd hole at the Concession Golf Club.

Patrick Reed, on the 568-yard, par-5 3rd at the Concession Golf Club, had 262 yards to the hole with his second shot. Viktor Hovland, playing alongside Reed, was just in front of him, about 250 yards out.

Hovland was ahead of Reed on his third shot, too.

“He topped it,” analyst Gary Koch said of Reed during Golf Channel’s broadcast of Friday’s second round of the World Golf Championships-Workday Championship at the Concession.

“Not quite what he’s looking for,” analyst John Wood said.

Reed had been trying to hit a slice, with a tree about 30 yards in front of him and to his right. He also swung with a slight “helicopter” finish, where, as GOLF’s Luke Kerr-Dineen explained here, he keeps his clubface open until the very end of swing. But instead of hitting his ball around the tree, Reed dribbled it past and into a bunker.

From 142 out with his third shot, Reed hit to within 4 feet and would end up making birdie.

As he walked out of the bunker, he laughed with Wood, a former caddie. Reed figured a player recovering in a hospital bed might be watching.

“He looked over at me and said with a big smile, I was just trying to give Tiger something to laugh about,” Wood said.