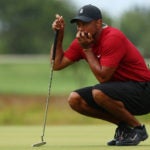 Tiger Woods at The Match: Champions for Charity in May.

The Tiger Woods documentary will feature his life on the course.

It will feature his life off it, too.

HBO’s “Tiger” will be broadcast over two Sundays in mid-December, with the first part airing Dec. 13 and the second Dec. 20, according to a release this week. It will include interviews with Steve Williams, Woods’ former caddie; six-time major champion and current analyst Nick Faldo; Pete McDaniel, the friend and biographer of Woods’ father, Earl Woods; Dina Parr, who HBO describes as Woods’ “first true love;” and Rachel Uchitel, one of the women tied to Woods’ well-publicized scandal just over a decade ago.

“Few global icons are more visible and less understood than Tiger Woods,” said Peter Nelson, HBO Sports executive vice president, in the release. “His prodigy came with painstaking sacrifice; his perfected athleticism immobilized him in agony before the age of 40; his self-made fame enabled a self-destructive world of secrecy; and his redemptive reemergence posed as many questions as it answered — not only about one of the greatest sportsmen ever to live, but also the greater American society that engulfed him.”

“Tiger” will use Jeff Benedict and Armen Keteyian’s New York Times best-selling biography “Tiger Woods” as a resource. In late May, Keteyian had said on the Burst Your Bubble podcast that the documentary would be two-hour episodes and also include interviews with long-time journalists Karen Crouse of the New York Times and Bryant Gumbel, and GOLF’s Alan Shipnuck and Michael Bamberger.

“The new two-part series ‘Tiger’ is a tremendous eye opener in looking at a master athlete whose dedication and obsession with the game of golf took him not only to the heights of fame and success, but down a spiraling road of darkness and finally redemption,” Pollard said in the release. “Hamachek and Heineman are masterful storytellers and have done an extraordinary job in shaping this nuanced and detailed journey of a man who is probably the greatest golfer of all time.”