On Earl, Tiger and Charlie Woods, and the bond that ties them 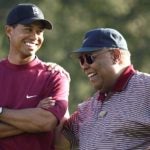 Ed note: Today, as it did on Thursday, Friday and Saturday, Bamberger Briefly appears in memory of, and in tribute to, Charlie Sifford, often described as golf’s Jackie Robinson and the winner of the 1967 Travelers Championship. Thursday’s subject was Jim Thorpe. Friday’s was black touring caddies. Saturday’s was Pete Brown.

When Tiger Woods received the Presidential Medal of Freedom last year, he nodded in Charlie Sifford’s direction. ”I always called him Grandpa, because he was like the grandpa I never had,” Woods said. President Trump stood beside Tiger, and Tiger’s mother and two children were in front of him. Tiger, two weeks after his fifth Masters win, was wearing not his club coat but a blue suit, with a white shirt and red tie. “I ended up becoming so close with him that I ended up naming my son, Charlie, after him. And so to have been chosen as the next golfer after Charlie is truly remarkable.”

The top of the order: Arnold, Big Jack, Grandpa Charlie, with Tiger batting cleanup. The four golfers who have won the country’s highest civilian honor.

If Sifford is Tiger’s metaphorical grandfather, by extension Tiger’s mother or father is in the family line, too. In that vein, it’s interesting to think of Earl Woods as some kind of heir to Charlie Sifford. When Sifford won the L.A. Open in 1969, Earl was still in active duty in the U.S. Army. He took up golf a couple years later, in Brooklyn, and soon after moved to Southern California. Tiger is now the unofficial host of the L.A. Open, and in the years to come, it will become to him what the Memorial Tournament is to Nicklaus.

Maybe Tiger will build his own greater Los Angeles course as the tournament venue, and if he does, you can imagine he’ll include a path to the first tee for kids from every kind of background. Tiger grew up playing public courses in Southern California. It was Earl who had the military ID for reduced green fees at the Navy Golf Course near their home in Cypress.

But for now let’s consider a more fundamental question: Where would world golf be today without Earl Woods getting bit by the golf bug in Brooklyn in 1972? His first course was Dyker Beach, as public as public gets.

The impact black Americans have had on golf in America is deep and immeasurable, but just for fun consider the broad influence, in golf and beyond the game’s borders, of this threesome of golf obsessives: Tiger Woods, Michael Jordan, Barack Obama. There are too many candidates for the fourth spot: George Grant, the African American dentist who invented the golf tee as we know it today. John Shippen, the black caddie who finished fifth in the 1896 U.S. Open at Shinnecock Hills. Charlie Sifford, Althea Gibson, Joe Louis, Calvin Peete, Lee Elder, Carl Jackson and innumerable others. But smack-dab in the middle of this discussion is one towering figure: Earl.

Earl is a mightily complicated man and figure, and if you want to know more about him, I point you to, in addition to his own books, the Tiger Woods biography by Jeff Benedict and Armen Keteyian, along with Tom Callahan’s His Father’s Son. Also Gary Smith’s 1996 Sports Illustrated piece. But when Earl’s life story gets truncated, he turns into a caricature. He was, for sure, a drinker and a smoker. He was a compulsive exaggerator. He was trained in the dark art of manipulation.

If you ever saw Earl and Tiger together — in their most public moments and their nearly private ones, too — there can be no question that each was deeply devoted to the other, and that, to type the obvious, without Earl there is no Tiger, not Tiger as the world knows him today.

You could see it in the way each leaned into the other (I am thinking now of the U.S. Amateur at the Newport Country Club in 1995), in their famous hug after the final putt of the 1997 Masters, in Tiger’s tears at the 2006 British Open, 10 weeks after Earl’s death.

“My dad has always had a big belief in my abilities and so have I,” Tiger said after his greatest victory, his 15-shot win at Pebble Beach in the 2000 U.S. Open. “The only difference is he stated them and I didn’t. I let my clubs do the talking. As a father, I’ll probably be that way, too, to my kids, be a proud parent.

“Today is a very special day. It’s Father’s Day. And I can’t tell you enough about what my dad meant to my golf, and to me — as a person growing up. All the times that I had questions in life, all the guidance that he’s given me, I can’t thank him enough. My dad always took me out, and we practiced and played and had a lot of fun competing against each other. Those are the times you look back on and you reminisce and you miss. And to have my dad still alive, while I won this championship, on Father’s Day, it’s very important to me.”

When you see Tiger and Charlie Woods together, you can see their bond, and you can see a confident and athletic 11-year-old, sturdy on his feet. Earl paved the way for Charlie. Mr. Sifford did, too.