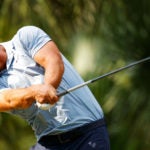 One week after a back and forth between Brooks Koepka and analyst Nick Faldo that began with whether players should be mic’d up, Faldo was back at it on Thursday, even though Koepka had withdrawn from this week’s Travelers Championship after his caddie had tested positive for Covid-19 before play began.

“Tim Wilkinson took the place of the great Brooks Koepka, which was sad for Brooks to miss out,” Faldo said, as the Golf Channel broadcast showed Wilkinson missing a birdie putt on the 18th hole at TPC River Highlands. “I was looking forward to hearing some more fascinating stuff from him today, but unfortunately he wasn’t around this week.

“I know he’s watching at home, guys, because he loves listening to we analysts and our scintillating insights. He’s probably poolside in his thong, you know, enjoying himself.

The feud began after last Thursday’s first round of the RBC Heritage, when Koepka was asked if he thought players should be mic’d up.

“I don’t understand why they want us to wear a mic when there’s a boom mic that stands 10 feet away from every shot that I hit,” he said. “If the announcers would just shut up and listen, you could hear every word that we’re talking about. I don’t understand what the thing is. Half the time the lady’s holding a boom mic, and she’s listening to everything we’re saying all the way down. If they would just shut up, they could hear everything.”

Koepka’s comment apparently got back to Faldo, and he was quiet during Koepka’s tee shot on 18 on Friday.

“He told we announcers to shut up. Let’s see here what he has to say about that one,” Faldo said. Seven seconds of silence followed, and the camera went back to Koepka, who mouthed a few inaudible words to his caddie.

On Sunday, the PGA Tour tweeted out a video of Koepka making an eagle on the par-4 9th at Harbour Town Golf Links, and during the rain delay that soon followed, Koepka quote-tweeted the video.

“Fascinating stuff out there…” he wrote.

On Thursday, after Faldo’s latest comment, Golf Channel announcer Bob Papa commended Koepka for withdrawing after the positive test of his caddie, Ricky Elliott. Faldo then did, too.

“Yeah, good on the guys for taking it very seriously,” he said. “That’s what everybody’s got to do. This unfortunately is going to be around, this Covid-19, for a long time.”