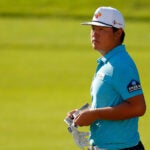 Sungjae Im is one of golf's brightest (and most inexhaustible) young stars.

Im, who entered Sunday’s third round one stroke off the lead at the Tour Championship, is one of golf’s brightest (and most indefatigable) young stars. At East Lake this week, Sungjae finds himself firmly in the mix for the Championship’s $15 million first prize — a sum roughly twice his current career earnings.

The gargantuan winner’s check is the largest in golf by a significant margin. Fifteen million is a ton of coin for established stars with comfortable bank accounts, let alone a second-year pro who still travels to events with his parents.

Yet when he was asked Saturday about how $15 million might change his burgeoning career, Im offered a curt response: it wouldn’t, at least not right now.

Sungjae Im: I would buy a house in the United States and save so that I can live a comfortable life in the future.

Q. Would you play less if you had $15 million or keep playing more?

For those who have followed his career thus far, Im’s response came as no surprise. In just his second year on the PGA Tour, Sungjae has already earned a reputation for two (fine, three) things: ball-striking, authentic Korean barbeque and attendance.

Including this week’s FedEx Cup playoff finale at East Lake, Im has registered a whopping 25 starts during the Covid-shortened 2020 season. And at the quarter-century mark, the results are pretty good — seven top-10 finishes and one win, his first-career PGA Tour victory at the Honda Classic in February.

His 2020 comes on the heels of last year’s even more jam-packed rookie season, in which Im led everyone on Tour with 35 starts (a number that would have been higher had he qualified for either the Masters or U.S. Open).

Still, the fact remains, he’s everywhere and, more often than not, he’s in contention.

There are any number of theories behind Sungjae’s preternatural commitment. One says it’s born naturally from his love for competition. Another surmises he’s simply gettin’ while the gettin’s good, particularly considering the professional complications that could arise from his forthcoming 21-month military service obligation as a South Korean citizen.

Whether you view his schedule as the makings of a sub-human competitive machine or simply a 22-year-old bubbling over with youthful zeal, you can rest assured: Sungjae Im isn’t in it for the money.

“I’m aware of the $15 million on the line, but I try not to think about it when I play,” he said. “I know if I play my best the next two days, the opportunity will come. It all seems like a dream. Just thinking about it now makes me pretty happy.”