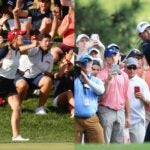 Jennifer Kupcho on Day 2 of the Solheim Cup, which coincided with Patrick Cantlay's winning Sunday at the Tour Championship.

Maybe this was you on Sunday afternoon, the power of the clicker in your hands.

On Golf Channel, there were 24 female pros — 12 Americans, 12 Europeans — playing (or cheerleading) on a classic Donald Ross course, Inverness, in golf’s most primitive form, match play, for nothing more valuable than the right to hoist a crystal cup.

On NBC, there were two male pros — one American, one European — in Atlanta, on a classic Donald Ross course, East Lake, playing a convoluted stroke-play system with so many millions at stake the money seemed practically meaningless by suppertime.

Yes, you went back and forth. Of course you did. But where did you log more time? Which event meant more to you?

You of course know how Sunday ended.

Europe has a 2-point lead over the Americans at the Solheim Cup, at Inverness. All 24 women will be on the course Monday, Labor Day, with 12 points and that precious hoisting at stake.

Jon Rahm, the bull-like Spaniard, played four days at East Lake in 266 shots. Nobody played better. Patrick Cantlay, a low-key Californian, traversed those same 72 holes in 269 shots. But he started on Thursday, per contest rules, with a two-shot lead on his nearest chaser (and a four-shot lead on Rahm). So he’s your FedEx Cup champion. Which means he’s now $15 million richer. Rahm, as runner-up, earned $5 million.

Those two will meet up again later this month, at the Ryder Cup. It will be must-watch golf.

Professional golf has never had a September exactly like this, with the pro game’s two best team events, the Solheim Cup and the Ryder Cup, both in September, both with Midwestern datelines. The Ryder Cup will be at Whistling Straits, near Kohler, Wisc., in three weeks. But Inverness first. Ladies first.

In victory, Cantlay said that he doesn’t play golf for the money. Money, surely, is a motivator, but not the motivator. The motivator is what it’s always been, at least to the players we are all drawn to: doing a difficult thing well while carrying yourself with a certain dignity.

The greatness of Cantlay’s six-hole playoff last week against Bryson DeChambeau — sudden death; match play, really — was that it wasn’t about money. Not for us, watching. It was about two totally different personalities, going toe-to-toe. It was the S.S. Minnow’s Gilligan versus Arnold Schwarzenegger’s Terminator. And Gilligan won. On Sunday, he beat Rambo. Except he really didn’t. And he won a great big pile of money. Which means nothing to us and, by Cantlay’s own admission, not that much to him.

That’s why, in no particular order, the four men’s Grand Slam events are so enduring, as are the four women’s majors (sorry, Evian), the three senior majors for men, plus the Ryder Cup and Solheim Cup and (some years more than others) the Presidents Cup. In Toledo on Sunday, the earth was shaking when Jennifer Kupcho do her thing and then Mel Reid did hers. As pure sport-as-theater, it was hard — you could say impossible — not to be more drawn to that.

Cantlay was asked about this interesting Sunday in golf, with two very different professional events unfolding at the same time.

“It had to be compelling stuff,” he said. Not even an hour after he was done playing at East Lake, he knew that the Americans had cut into the European lead at Inverness and were trailing by two points. “I’ll be rooting for them to hopefully pull it out,” he said. No question to whom he was referring. Rahm will be doing the same, on the other side.

Cantlay made a little nod to his main sponsor, Goldman Sachs, saying the financial firm first would help him find a place to invest his new millions. Well, of course. But nobody playing at Inverness, on either side, had any stray thoughts like that. They were playing for all the reasons Cantlay mentioned, and then some. It was must-watch golf.