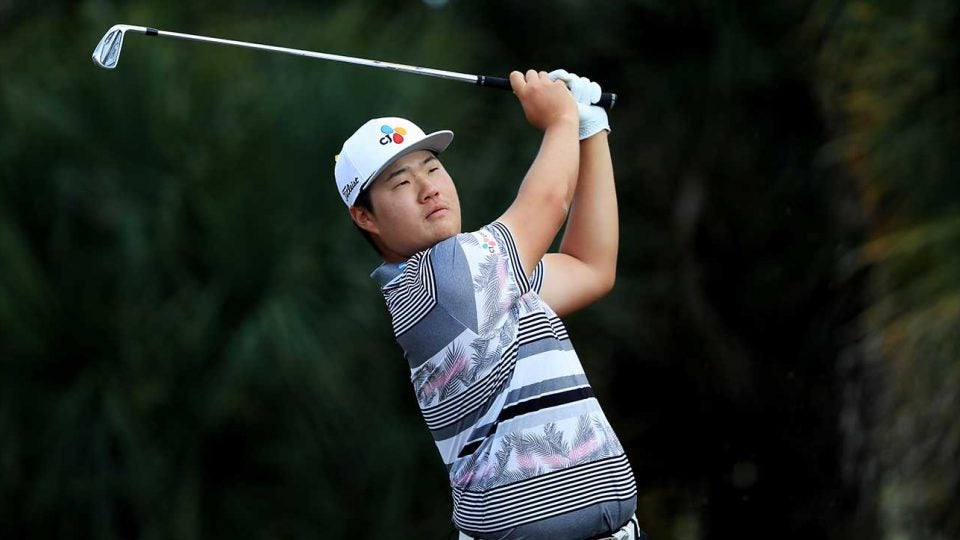 Sungjae Im closed with a 66 to win the Honda Classic for his first PGA Tour victory.
Getty Images

PGA National in Palm Beach Gardens, Fla., was playing as tough as any course had in the past few years for the first 54 holes of the Honda Classic, and that held true for Sunday at well. Here’s what you missed in the final round.

How it happened: Tommy Fleetwood started the day with a one-shot lead after 54 holes, but a big swing happened around the turn on Sunday. Fleetwood, who started the day birdie-birdie, bogeyed two of his last four holes on the front to turn in even par, and it was right around that time when Sungjae Im, three groups ahead, rolled in a short birdie putt on the par-4 11th to take the solo lead at six under overall. The final pairing of Fleetwood and Brendan Steele both turned in five under, one back of Im, but eventually everyone was bunched. Im made bogeys on 12 and 13 but birdied 15, and Canadian Mackenzie Hughes birdied 11 and 13 — all of a sudden there was a four-way tie for the lead at five under. After Fleetwood and Steele bogeyed 13, it was just Im and Hughes on top. Im got the solo lead when Hughes bogeyed 16, and both players birdied 17 — Hughes via a 54-footer — to make it a one-shot Im lead with the par-5 18th to play. Im had to lay-up on 18 and then fatted a wedge into a bunker, but he got up and down for par to get in at six under, one ahead of Hughes. In the final pairing, Fleetwood and Steele still had a chance at four under with the par-3 17th and reachable par-5 remaining, and Fleetwood kept his hopes alive with a birdie on 17. Steele needed to eagle the 18th and Fleetwood needed a birdie to force a playoff, but both players went for the green in two and found the water, making bogey. Hughes finished alone in second.

His approach landed in the water and he made bogey to finish solo third. pic.twitter.com/ZNtQI7h1O0

Why it matters: It’s the first PGA Tour victory for one of the sport’s youngest talents. Im, 21, won twice on the Korn Ferry Tour in 2018 but hadn’t won on the PGA Tour yet despite 10 Top 10s in 49 events entering this week. Last year’s PGA Tour Rookie of the Year now has his first one.

Most courageous shot: Tied for the lead and playing the par-4 16th hole, Im found the left fairway bunker and had 177 yards for the second shot. But that’s where trouble came into play. There’s water short of the green, and NBC on-course reporter Jim “Bones” Mackay noted that Im’s ball was resting close to the lip of the bunker and that he’d have trouble hitting his ball cleanly over it and clearing the water. “My goodness gracious, you got all kinds of thoughts going through your head at this point,” Bones said. Im opened up a five-iron and found the front of the green, which led to a two-putt par from 29 feet. He avoided disaster by pulling off the approach, and after playing partner Hughes made bogey on the 16th, Im walked away with the solo lead.

Best bounce-back putt: Minutes after he lost the co-lead with his bogey on 16, Hughes rolled in a 54-footer(!) for birdie on 17, momentarily tying him with Im, who took the solo lead right back when he made his eight-footer for birdie.

To tie the lead.

Up next: The Florida swing continues as the Tour heads to Bay Hill for the Arnold Palmer Invitational. The field is headlined by Brooks Koepka, Rory McIlroy, Rickie Fowler, Patrick Reed and Phil Mickelson. Francesco Molinari is back to defend his title.