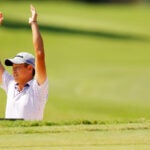 Collin Morikawa celebrates his hole-out from the bunker on the 1st hole at East Lake Golf Club on Sunday.

Collin Morikawa’s ball was halfway buried along the upslope of the right greenside bunker on the 1st hole at East Lake Golf Club. His left leg stood on the upslope, the top of his foot parallel with the ball. His right leg stood a good yard below.

His left arm and his right arm would stand above his head.

Morikawa took three looks up at the hole. He took a three-quarter swing to blast the ball out. Sand blew into his face. The ball bounced three times, rolled for the rest of the rest of its 47-foot journey and curled into the right side of the cup. A birdie 3 on the 448-yard par-4 on Sunday during the third round of the Tour Championship.

“Well, this is virtually impossible, and David Feherty said he thinks it’s the most difficult bunker shot he’s ever seen holed and I might have to agree,” analyst Paul Azinger said on the NBC broadcast, referring to his fellow analyst.

Ten seconds after his ball touched down into the bottom of the cup, Morikawa’s arms both shot up. Touchdown. He tossed his club to the right. A Hail Mary, too.

“Forty-seven feet,” announcer Dan Hicks said on the NBC broadcast. “I can not recall seeing a buried lie, a shot holed out from this kind of distance ever. And you’re a guy who knows a little bit about bunker play, Zing.”

The birdie moved this year’s PGA Championship winner within three shots of the lead in his first Tour Championship.

“Tell you what, he can teach me a thing or two,” Azinger said on the NBC broadcast. “That shot, with the ball that far above his feet – it was hip high.”