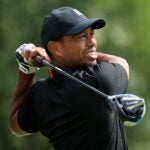 Tiger Woods has won 15 major championships, the second most in history, and 82 PGA Tour tournaments, tied for the most. He’s inspired a generation. The generation has tried to imitate him.

Woods has tried to imitate the generation, too.

TaylorMade recently gathered its professionals for various videos, and one was turned into the Wolff Challenge. It asked fans to try to do their best “Wolff,” the unconventional swing of one of the game’s young stars, Matthew Wolff. The pros also tried. Jon Rahm attempted to do the left hip twist that Wolff does to start his swing. He smiled. Jason Day tried off the tee. Dustin Johnson tried off the tee.

Woods tried after watching one of Wolff’s swings. (It begins at about the one-minute mark here.)

“How does he do it?” Woods said to a few pros standing around him as he tried the left hip move three times, though it appeared he was moving his right hip more.

“I don’t know if I can get it back,” he continued as Johnson was watching.

“You got to look. Everything is like … ” Morikawa said as he made a left hip move.

Woods was in awe.

“I wonder where I’m going with that,” he said to the pros around him.

Woods backed a few steps away from the group. He tried one slow right hip move and one slow backswing.

“Then I can’t make a backswing,” Woods said to Johnson, who laughed. “I don’t know where I’m going with that.”

Wolff was proud of Woods’ work.

“Had some scooooobie fun teaching the boys how to Wolffie… @tigerwoods@djohnsonpga I see you,” Wolff wrote on Instagram in promoting the Wofff Challenge. (The winner of the contest and some unique entries can be found here.)

“Pretty impressive, Wolffie,” Woods said to Wolff as they watched others hit.