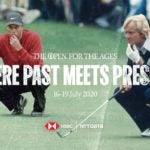 The Open of the Ages will give golf fans the chance to see legends of the game battle it out at the Old Course at St Andrews.

Ever wanted to see Tiger Woods and Jack Nicklaus battle head to head? That once impossible golf fantasy will soon be a reality — sort of.

In the absence of the 149th playing of The Open Championship because of the coronavirus pandemic, the R&A has come up with a creative strategy to fill the void. To mark the celebration of what would have been the week of the Open Championship, the R&A is broadcasting “The Open for the Ages,” which will bring together some of golf’s greatest champions for a battle at the Old Course at St Andrews.

No, the players won’t be physically competing against one another, but thanks to modern technology and some broadcast savvy, The Open for the Ages will allow for a simulated tournament between past Open champions.

“This exclusive edition of The Open features 50 years of archive footage expertly edited and woven together with modern graphics and new commentary to imagine a Championship contested by the legends of the sport including Jack Nicklaus, Tiger Woods, Seve Ballesteros, Tom Watson, Sir Nick Faldo and Rory McIlroy,” the R&A said in a release.

The Open for the Ages will culminate in a final-round broadcast Sunday, July 19, on NBC and the Golf Channel, with streams available on TheOpen.com and The Open’s social media channels. Anticipation of the final round will be built over the preceding three days as in-play clips, live leaderboards and end-of-play highlights are shared across social media.

The winner of the event will be determined by a fan vote combined with a data model from NTT DATA that utilizes players’ career statistics.

“Golf is one of the very few sports where this concept can be created and brought to life,” said Martin Slumbers, chief executive of the R&A. “The way in which the sport is filmed allows us a truly unique opportunity to reimagine history and bring together the greatest players from many different eras on a scale which has not been done before, either in golf or in other sports.”