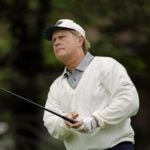 These old keys from Jack Nicklaus can help you play with more power.

While Tiger-proofing and a bulked-up Bryson have been more recent additions to golf’s distance craze, players have longed for length since the beginning of time. It remains a fact, some centuries later, that shorter golf courses are generally easier golf courses. Indeed, the simplest way to start scoring lower in modern golf isn’t to learn how to hit certain clubs well, it’s to hit them farther than everybody else.

In this week’s Flashback Jack, Nicklaus dives into the basics of gaining distance, explaining his keys for earning a more powerful, complete swing to add length to your game.

As Nicklaus explains, the key to longer drives is a faster swing, but swing speed doesn’t necessarily correlate with swing effort — you shouldn’t be aiming to swing as hard as you can. Rather, Nicklaus says, you’re better off trying to create a swing that is long and wide rather than short and narrow.

Once you’ve got the feel of a longer swing down, Nicklaus says it’s important to focus on the top of the backswing. The top of the swing is the inflection point for those looking for longer distance, so it’s crucially important to ensure you’ve reached the proper position.

“At the top of the swing I am completely coiled,” he says. “My legs are in a position where they can really start to drive. My shoulders and upper body are turned. My club is in a fully horizontal position.”

If you’ve coiled to the right position, now comes the easy part — letting the clubhead do the work.

“Now, from this point, I drive with my legs,” Nicklaus said. “Release the golf club, uncoil my body, and release completely at the golf ball.”

If you focus on these few fundamentals, you’ll be hitting Golden Bear-approved bombs in no time.

“All these elements do the one thing that is necessary to create power, and that’s to make sure that the clubhead moves fast.”