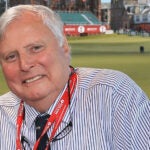 For so many of us, Peter Alliss and the Open Championship are one and the same. Alliss is the man we grew up experiencing, learning and laughing about the game with. The voice of golf, who sadly passed away late last year at the age of 89.

His presence was felt on Friday at the Open Championship when the R&A paid tribute to “the great Peter Alliss.” With members of his family watching from the stand, including wife Jackie, Alliss was celebrated with some kind words and a minute-long applause.

“Peter brought us so much joy, humor, and insight to the millions of us watching on television,” the announcer said. “As a player and a commentator, Peter made an indelible mark on The Open. We all miss his wise and witty commentary.”

A heart-warming moment, which you can watch for yourself below: