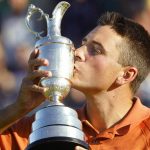 Ben Curtis' 2003 Open Championship victory was a win for the ages.

Eighteen years ago, I wasn’t exactly ready to become Champion Golfer of the Year.

After all, you’re not supposed to think about winning The Open through 36 holes. Or 54 holes. Too many things can happen.

But when you shoot six under on the first 11 holes on Sunday at Royal St. George’s, like I did in 2003, life starts moving pretty fast. I held on tight to the clubhouse lead and suddenly three different cameramen were sticking their lenses in my face. It was a lot!

Did I ever think I was going to win a major? I don’t know. But I did always dream of playing and winning on the Tour. Then, wham, it happens on the biggest stage and I’m on the cover of every newspaper in the London airport. Days later, I am on a whirlwind media tour in New York City, and the next week my wife and I were guests at the White House.

A victory like that changes everything around you. I would make a milk run for my wife and come back an hour later with no milk, looking disheveled after being stopped for dozens of photos. Ohioans were excited about my victory, that’s for sure.

But like anything, those highs don’t last forever. Everyone’s expectations for me changed, including my own. I had earned an incredible five-year exemption for full status on the PGA Tour. Believe me, job security is an asset. But with all that guaranteed time comes an urgency to validate it constantly; to live up to the man who triumphed in southeast England.

For two years, I missed as many cuts as I made, and it wore down my golf psyche. I was too worried about the outcome. My college coach, my caddie and my wife could see a difference, and they stepped in to help me reset mentally. The takeaway was simple: Get back to who I was before I won the Open. In short, to be me. It may have taken a couple years to understand what internal pressure had done to me, but eventually we straightened it out as a group. Sure enough, I was able to bag a couple more Tour wins before ending my competitive playing career in my early 40s.

Could I have played the Open this year and other Opens in the future? Definitely. I earned that right, and I know about 30 people who asked me to play just so they could caddie for me. But I’m content. I’d rather give back to the golf community at my academy just outside of Cleveland. I stay close as ever to the game that I love and pour all I’ve got into the youth of the game. With any luck, we’ll help craft the future of another Open Champion from Ohio.

Curtis, the surprise winner, at age 26, of the 2003 Open Championship at Royal St. George’s, now runs the Ben Curtis Golf Academy, in Hudson, Ohio, provides for children in need through the Ben Curtis Family Foundation and talks about his passion for wine on the podcast “Clubs and Corks.”