Louis Oosthuizen is breaking records and leading at a major — again 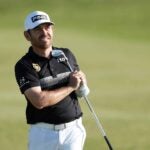 Louis Oosthuizen cruised to the 36-hole lead at the Open Championship Friday.

Many years from now, someone will invariably tell Louis Oosthuizen’s 2021 major championship story.

They’ll start with the story of his throwback performance at a throwback PGA Championship, in which Oosthuizen, 38, went toe-to-toe with 50-year-old Phil Mickelson — bowing only on the final day when a comeback effort fell a single stroke short.

Or perhaps they’ll tell the story of the U.S. Open, when Louis firmly grasped his first win on North American soil at Torrey Pines, only to see it snatched away by a duck-hook at the worst imaginable moment and a charging Jon Rahm.

On Friday at Royal St. George’s, Oosthuizen was not only better than his fellow competitors — as has become a fairly regular theme over the last eight weeks of competition — he was also better than anyone in the Open’s 149-year history. It was on Friday that Oosthuizen (-11) claimed the halfway lead by a two-stroke margin, giving him a two-round total of 129, the lowest 36-hole total in the history of golf’s oldest major championship.

“Front nine, I didn’t really do much, just plodded along,” Oosthuizen told NBC after his round. “Then the wind died down on us, and it was really good, perfect links golf weather on the back nine. Took advantage of that, and just kept patient. You know, I had a couple of bad shots coming in there, but other than that just solid golf.”

By a couple of bad shots, Louis is (we hope) being melodramatic. Even with the winds down and the sun shining, his performance over the opening two rounds at Royal St. George’s was nothing short of remarkable. Through two days, he has as many eagles as he does bogeys (one), the latter of which took him 34 holes to commit.

Still, Oosthuizen knows the level of precision required to win a major championship. He’s done it himself, and more recently been snakebitten by it, wilting on a pair of Sunday afternoons to a pair of runner-up finishes. He knows he’ll only get so many opportunities to truly contend for majors, and he may never get another opportunity this good — not that it changes anything.

“I’m going to try not to think about the second [place finishes],” he said. “I know my game is in a good place and found strategically how to play this course. I’m taking a lot of drivers and I’m betting on myself for that. Hopefully in the weekend I’ll feel comfortable and I can do it again.”

Oosthuizen has seen this story enough times to know his outcomes are limited. But what’s the fun in skipping ahead to the end?

“You try not to think of it until you’ve done it,” he said. “Around this golf course, a lot of things can happen. I don’t think you want to think too much of it on a links course until you get to that 18th green, and hopefully you have a lead.”

There’s at least one more chapter in Louis Oosthuizen’s 2021 major championship story. Maybe even one for the history books.