Padraig Harrington had the perfect description of good vs. great golfers 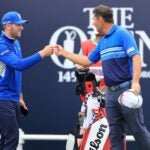 Padraig Harrington and Sam Forgan on the first tee at the Open Championship.

If you want an honest, incisive analysis of your golf game, spend some time around Padraig Harrington.

Harrington played the first two rounds at this year’s Open Championship alongside Aussie Brad Kennedy and Englishman Sam Forgan. Harrington shot two-under 68 on Friday to get to even par for the tournament, earning himself a trip to the weekend. That bettered his playing partners by five and 10 shots, respectively.

Afterward, he was asked to break down their showings.

Kennedy is an experienced pro, 47 years old and a consistent presence in golf tournaments across Australia and Asia over the last two decades. Harrington knew his bio well, and knew that his four-over Friday 74 doomed him to a missed cut.

“Brad Kennedy is a seasoned player, 12 years on the Tour in Japan, nine wins,” Harrington said. “He was unlucky, actually, I would think to miss the cut. He had a number of three-putts that I would suggest were surprising to him today.”

But he saved his more insightful commentary for Forgan who had opened with 73 but struggled to four bogeys and two doubles en route to a second-round 77. Forgan is a 31-year-old who qualified for the Open via Regional and Final Qualifying, both at the Prince’s course, which abuts Royal St. George’s.

“Very good ball striker. Like a lot of these guys, lacks a little bit of belief in his game,” Harrington said. “Good solid game, but that’s really the difference. He hits it as well as anybody — or a lot better than a lot of players — out there, but it’s just a belief in his game.”

Like any proper analysis, it’s hard to know whether this is complimentary or disparaging.

For Forgan, it was a dream just to make the field — and it turned into a dream to be there. He was emotional after finishing out on the 18th green, covering his face with his cap as he embraced his caddie and his wife.

“I don’t think it was because I played badly. I don’t know. I just loved it. I guess you don’t know when it’s going to happen again,” he said.

The former Louisiana Tech golfer spends much of his time coaching; he’s an assistant professional at Felixstowe Ferry Golf Club. But he clearly has plenty of game, too, a game he put on display in qualifying. And while he beat just a handful of players in the field, Harrington said he was impressed with Forgan’s ball-striking. But ball-striking on its own is not enough.

“We always say that in any range you can find loads of guys out there, and it’s the ones that believe that do the scoring,” Harrington said. “For him, he should take away from this that he’s well capable of doing it, it’s just a question of believing, being comfortable in this position.”

He didn’t just speak about Forgan’s game to the media, though. Harrington gave an encouraging word post-round with the man himself.

“I mean, Padraig was great,” Forgan said afterward. “He was speaking at the end and he was saying, ‘You’re good enough and hit it far enough, you’ve just got to believe in yourself a bit more.’ That’s great to hear.”

That is, of course, easier said than done. Forgan has thought about giving up the full-time pursuit of a playing career.

“It’s one of those things where you obviously get a taste for it and that’s nice, but for me — strange time in my life really, I suppose. I’ve got a kid on the way and that sort of thing,” he said. “So, yeah, I kind of said this year might be my last year playing anyway, so I guess we’ll kind of look at that when I get home. Talk with the wife and that kind of stuff and see what’s going on. Yeah, we’ll see.”

As for Harrington? He’s quite good at taking his own advice, and his belief is strong as ever.

“But you know, it is what it is. It’s good to be there at the weekend. Happy to be there for the weekend, but a little bit disappointed with my own expectations.”

There you have it, golfers. Four lessons: Work on your game. Believe in your game. Keep expectations high. And listen to Padraig Harrington. Shoot for the stars, as they say, and even if you miss, you might still make the weekend at the Open Championship.