Ryder Cup drama! Life-changing money! Bryson! Why Sunday golf at the BMW will be wild 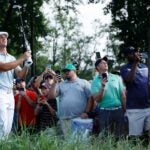 Bryson DeChambeau hits his tee shot on Saturday on the 16th hole at Caves Valley.

The headline screams, doesn’t it? Sunday golf at the BMW will be wild. And we’ll explain the why shortly. But just how wild, you ask. Consider what the final 18 holes will mean to two players — Patrick Cantlay and Erik van Rooyen — who were just a shot apart on Saturday.

Van Rooyen’s wildness number is perhaps infinite. He enters Sunday 33rd in the FedEx Cup standings, which send only the top 30 to the Tour Championship. Make it, and he automatically snares spots in some of next year’s biggest events, including the Masters, U.S. Open and Open Championship. Make it, too, and he plays for a $15 million first-place check — which is over FIVE times more than he’s made in his career ($2.5 million).

“I’ve got nothing to lose,” Van Rooyen said. “Atlanta will take care of itself. I know Bryson and some of those boys are flying, but it’s a funny old game, so I’m focused on this tournament and trying to put myself in contention with a couple holes left.”

Oh yeah. We haven’t even got to Bryson DeChambeau.

Sunday will be a wild one.

The Ryder Cup will be played Sept. 24-26 at Whistling Straits in Wisconsin, and the last of six automatic picks for the U.S. team will be determined on Sunday. (Already qualified are Collin Morikawa, Dustin Johnson, DeChambeau, Brooks Koepka and Justin Thomas, while the Europeans automatic selections — nine in all — will be finalized on Sept. 12.)

Entering this week, Tony Finau was sixth in the standings for the U.S. automatic pick, followed by Xander Schauffele, Jordan Spieth, Harris English, Patrick Reed, Cantlay, Daniel Berger and Webb Simpson. According to the Ryder Cup’s website, it will likely come down to Cantlay, Finau and Schauffele on Sunday. Cantlay, the website says, can leapfrog into the spot with a victory, a Finau finish outside of the top four, and a Schauffele finish outside of the top three, but should he falter, it will come down to money earned — if Schauffele wins about $19,000 more than Finau, he’ll finish sixth.

Of course, still up for grabs are six U.S. picks from captain Steve Stricker (and three from European captain Padraig Harrington). Stricker will no doubt be looking at how Sunday and next week play out, as he announces his choices on the Wednesday after the Tour Championship (Sept. 8).

“I don’t think I have a chance to qualify for the top six,” said American Sam Burns. “The only thing I can really do is go play golf, and if Captain Stricker wants to give me an opportunity, I would do anything to be on that team. We’ll see what happens.”

It’s not so much the cash on the line this week — though a $9.5 million pot is no chump change. But it’s also no $60 million, the purse awarded at next week’s Tour Championship. And that’s divided among just 30 players — the “last-place” finisher earns a whopping $395,000, while the winner, as mentioned above, brings home $15 million.

Here’s where it maybe gets a little more difficult than shooting a 59 — explaining who qualifies for next week. But let’s give it a go. The BMW is the second leg of the Tour’s playoff system. Last week, the Northern Trust was the first, where the top 125 players in a season-long standings played to determine the top 70 in the standings for this week. Sunday will finalize the top 30 for Labor Day weekend’s Tour Championship — and the top of the top 30 has its perks.

The No. 1 player in the standings — which, as mentioned, is Cantlay heading into Sunday — will start the Tour Championship at 10-under par. The No. 2 will begin at eight-under, the No. 3 at seven-under, and on down the line until the Nos. 26-30 players start at even par. So yes, a player could “win” the tournament, but won’t win, based on where he starts the event.

“But you can still have a very good season without making the Tour Championship. The playoffs nowadays, they’re so volatile. There’s so many changes that can happen with somebody being 105th in the FedExCup and having a great week and all of a sudden he jumps to 15th or 10th or something like that or even better. Obviously that is difficult to adjust to sometimes, but like I said, hopefully I’ll make it to the Tour Championship again and enjoy it there.”

Finally, DeChambeau. You want wild? He’ll give you wild.

On Friday, the Tour’s longest hitter shot a 12-under 60 at Caves Valley. On Saturday, he eagled 4 and 5. And he was leading by four shots standing on the 12th tee, only to hit shots in the water on that hole and the next and walk off the 13th green down a stroke to Cantlay — an amazing five-stroke swing in just two holes.

They would finish tied for the lead at 21-under, which is three shots ahead of Sungjae Im, and four strokes ahead of Burns, Garcia, Abraham Ancer and Rory McIlroy.

“It’s ultimately about winning no matter what,” DeChambeau said. “Hopefully I can go get the job done tomorrow. I’ve done it eight times; hopefully I can make it my ninth.”