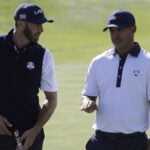 Brooks Koepka has a 4-3-1 career record in the Ryder Cup.

The Ryder Cup is just around the corner, and everyone is curious about how captain Steve Stricker will fill out his roster.

Will he play it safe with the highest-ranked stars from the Official World Golf Rankings? Are there wild cards that will make a surprise appearance at Whistling Straits? How much will he take chemistry into account when assembling the team?

Soon enough, all those questions will be answered.

But picking the team is only one component of Ryder Cup captaincy. Another element of Stricker’s job — and perhaps the most important one — is setting the lineups for each session. Sending out the wrong mix of players can be devastating.

Stricker will likely take players’ opinions into account when making these decisions, and at the first FedEx Cup Playoff event this week, Brooks Koepka took the opportunity to make an early pitch for the kind of player he likes to be paired with in team settings.

“I like an enthusiastic guy,” Koepka said. “Like I thought Brandt Snedeker was perfect for me when I played. A guy that gets high, gets low, gets excited. I don’t show that. I really don’t have those feelings. So it’s kind of fun for me when I can kind of experience those.”

“I just prefer when a guy is very enthusiastic,” he said. “With that being my first Ryder Cup, I learned what I liked early. I think that’s beneficial for me, but you know, certain guys will say different things.

“You know, said what I like or what I like in a partner that I’m playing with. We’ll see. At the end of the day, it’s up to them. I don’t exactly get to choose who I play with, but you know, they will put the best team out there that they can.”

Stricker will announce his captain’s picks at the conclusion of next week’s BMW Championship. The Ryder Cup is scheduled for Sept. 24-26 in Sheboygan, Wisc.